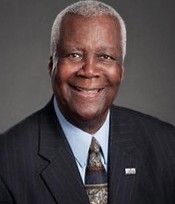 Ice Cube's recent anti-Semitic tweets and ex-NFL player Larry Johnson's conspiracy theories are a source of shame. But DeSean Jackson's publicly quoting Hitler on Instagram gave me hope, because within hours Zach Bonner just as publicly rebuffed DeSean's nonsense – showing the world, in microcosm, what causes racism and what can end it: ignorance and relationship. DeSean acted on impulse. Zach Banner acted on long-term friendship. Don't rush by that truth.

Except for Native Americans, blacks and Jews are the most embattled peoples in America for histories and traits beyond their control. Just as Jews died helping to secure black voting rights in Mississippi … just as they flanked Martin Luther King Jr. to advance the movement that spurred the 1964 Civil Rights Act … just as they helped found and lead the NAACP and the Urban League … this moment in black history and justice belongs also to our brothers and sisters in suffering.

Jews and blacks are attacked in their places of worship. Both groups know rejection and marginalization. Many of both have changed their names, affecting their identities, to level the playing field or for self-preservation. In the 1940s and '50s, when Jewish Ph.D.'s and profs were devalued by white colleges and universities, HBCUs (Historically Black Colleges and Universities) opened opportunities for employment, benefiting both sides. History reveals the mutual gain of our standing together in crisis.

History also reveals that laws alone cannot guarantee change. The Emancipation Proclamation fell to the Jim Crow Laws, which eventually gave way to the Civil Rights Act of 1964. But only as the Zach Banners of the world defend people who are nothing like them does the law grow in spirit and in truth.

For every person, white or black, now asking "What can I do?," the deceptively simple answer is to be like Zach, to change the world through genuine relationships. How does that work? A white woman recently told me she has no blacks in her life; she had no idea where to start. As a pastor, my first response is for her to go to a black church service, to meet on safe ground. But that's impossible right now. After some thought, I told her about Reticular Activating Vision, a term from my best friend, Coach Bill McCartney. It means that the opportunities are there; you see them once you start looking.

I also gave her the rules of engagement – the radical engagement absolutely required to begin to drop toxic enmity between police and African American communities, to begin to reverse the distance and division between blacks and whites, blacks and Jews.

I told her a cross-cultural bond begins with radical intentionality – purposeful, positive, planned – and a radical commitment to two-way talk. Like blood in a body, when the flow of dialogue stops, love dies, and resentment begins. Dialogue can initiate, sustain, or resolve conflict. It must be sincere on one part – vulnerable and self-disclosing – and on the other, sensitive to the other person, the birthing ground of empathy. In a disagreement, "What in the world are you thinking?" gives way to "Help me understand." In a strong disagreement, a mature relationship has room for sacrifice, the humility to put another person first. Interdependence –when necessary differences strengthen unity and illuminate equality – emerges. The freedom to be human and flawed, to make mistakes and risk offense, becomes its own strength. The talk bumps along, and if you stick it out, a day comes when you are each other's advocate.

One day in the late 1990s, on a cross-country flight, my wife and I used my frequent-flying status to upgrade to first class, where I began to stow our luggage. "Not there," a white flight attendant said to me, "Row 17." Retrieving our suitcases, I made my way back to row 17. A few minutes later, I witnessed the same flight attendant make space and insert the luggage of a white man next to her – right above my seat in first class, after which the man moved back to row 20. My wife held my hand and I worked to hold my temper. A man behind me leaned forward and said, "I'm a professor at the University of Colorado, and I've never seen anything like that. I'm going to write her up." I sat still, bruised.

The next day at a group devotional with Coach McCartney, still smarting, I told the group what had happened. Glancing at Coach, I saw his cheeks were wet, and in an instant my wound was healed, the cumulative effect of a thousand hours of talk, and sensitivity, and vulnerability, mistakes, poor judgment, ignorance, commitment … and friendship.

In today's looting and rioting and shouts of Black Lives Matter, driven largely by millennials and the generation after them, we have three choices. One, we can do nothing. Two, we can add to the problem and face new outrage every few years. Or three, we – and I mean every individual – can begin a meaningful relationship with a person who is racially, radically different.

My friend Gary Daichendt, former executive VP at Cisco, recently canvassed Silicon Valley leaders about the generations coming up in corporate America. To a person, he says, at some point a young interviewee will want to know how being part of that company will help him or her change the world. Zach Banner is living his answer to that question, and DeSean Jackson may yet. In my case, the genuine tears of a close friend, someone nothing like me, changed my life. If enough people are willing to truly get to know each other, I have reason to believe we all could change the world.