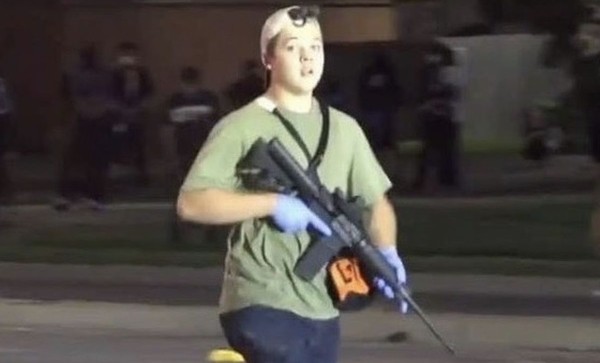 Kyle Rittenhouse, 17, was charged with murder in a shooting during rioting in Kenosha, Wis., on Aug. 25, 2020 (video screenshot)

A video posted by a New York Times journalist appears to show the teen charged with murder amid rioting in Kenosha, Wisconsin, Tuesday night was fired upon first and acted in self-defense.

Kyle Rittenhouse, 17, was charged in the shooting incident Tuesday night in which two people were killed, Anthony Huber, 26, and Joseph Rosenbaum, 36. A third person was seriously injured. Rittenhouse was arrested at his home.

At 23:19, Rittenhouse is seen in this YouTube livestream. He's being chased into a parking lot. While he is being pursued, an unknown gunman fires the first shot into the air. pic.twitter.com/BSD8rd6ARN

Christiaan Triebert, a member of the Visual Investigations team at the New York Times, posted the video on Twitter. He said Rittenhouse was being chased then turned toward the sound of the gunfire as another pursuer lunged toward him. The teen then fired an AR 15-style rifle four times and appeared to shoot the man in the head.

He said the other gunman fired first, pointing out Rittenhouse turned toward the sound of the firing.

The New York Times reported Rittenhouse was at a Kenosha car dealership earlier that evening where rioters had burned vehicles.

He told an interviewer he was there to protect the business. Rittenhouse remained there for an extended time, offering medical assistance to protesters.

At one point he visited with police officers in a patrol car while holding his rifle.

The report said he later left the dealership and police wouldn't let him return.

Six minutes later, video shows Rittenhouse being chased by an unknown group of people into the parking lot of another dealership several blocks away. While under pursuit, an unknown gunman fired into the air, the Times said.

The report said Rittenhouse then turned toward the gunfire and returned fire as another pursuer lunged at him.

Police were only a block away, and he walked with his hands up toward the vehicles, but officers drove by him without stopping.

The Gateway Pundit blog noted reports that the three shooting victims who attacked Rittenhouse have arrest records and possibly are felons. One was carrying a handgun, possibly illegally.

Rittenhouse supported causes such as Blue Lives Matter and other police advocacy organizations.

DailyMail.com reported Police Chief Daniel Miskinis said the violence happened because "some persons who were out after the curfew became engaged in some type of disturbance and persons were shot."

"Had persons not been out involved in violation of that, perhaps the situation that unfolded would not have happened."

The Intercept reported Fox News host Tucker Carlson "set off a firestorm of criticism" when he stated Rittenhouse felt he "had to maintain order" because "no one else would."

"The chaos that began with the first George Floyd protests on Memorial Day has reached its inevitable and bloody conclusion," Carlson said. "Last night, three people were shot on the streets of Kenosha, Wisconsin. Two of them have died. Police say they’ve charged a 17-year-old with murder."

Carlson said Kenosha "has devolved into anarchy because the authorities in charge of the city abandoned it."

"People in charge, from the governor of Wisconsin on down, refused to enforce the law. They stood back and they watched Kenosha burn."