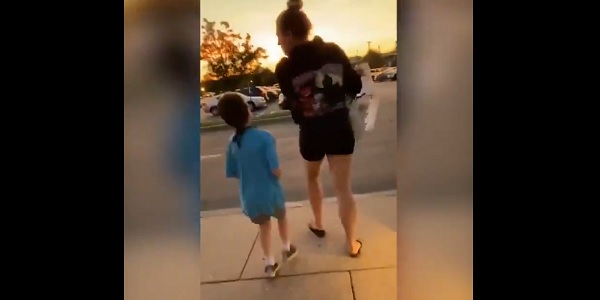 Boy, 7, attempting to get his MAGA hat back from anti-Trumper who stole it

Outside the venue of Joe Biden's acceptance speech Thursday night, a mother showing support for President Trump captured on video two women stealing the pro-Trump "MAGA" hat of her 7-year-old and tearing up their signs.

Later, one of the women is seen punching a man who came to defend the mother. The aggressor then approaches the mother and begins swinging at her as well.

"The DNC tried so hard to build a message of kindness, normalcy, and love ... which is quite the opposite of who their supporters really are," commented the Twitter news site Twitchy, which highlighted the video.

Moments ago outside of the DNC convention, Joe Biden supporters attacked a 7 year-old boy.

He was attacked simply because he wore a @realDonaldTrump hat.

His name is Riley.
Watch it happen.
Listen to him cry.

Will Joe condemn this violence against Children?

The International Business Times reported it happened when Trump supporters arrived at the Chase Center in Wilmington, Delaware, where Joe Biden accepted his party's nomination.

"The clip starts off with one of the women, wearing black, dragging what appears to be a 'Creepy Joe' sign with her feet along the pavement of the parking lot," the report said.

The mother of the boy, Riley, told the women, "Get off my property! Are you destroying my property?"

One of the woman states, "Yes, we are," and she and her companion rip up the sign and hurl it at the mother.

At the end of the video, one of the women throws a swing at a man the mother has asked to help.

"The video ends with the woman in black approaching the mother and assaulting her," the report said.