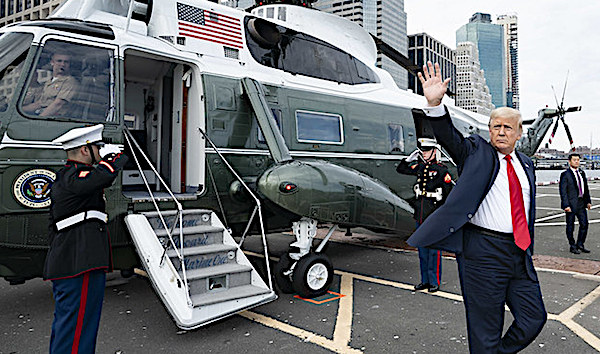 A few days ago, billionaire far-left mega-donor George Soros, who seems to finance everything that is perverse, anti-police, anti-law-and-order and anti-freedom in America today, told an interviewer that Donald Trump is “dangerous” and will “do anything to stay in power.” Soros was echoing Joe Biden’s recent claim that, "It's my greatest concern, my single greatest concern. … This president is going to try to steal this election."

Biden and Soros aren’t alone among those on the left – including not just the Democratic Party but virtually the entire media establishment – expressing anguished “concern” that Republicans will lie, cheat, steal and collude with foreign powers to win in November.

A Washington Monthly story headlined "How Trump Will Try to Steal the Election” exclaims, “If voter suppression and foreign influence don’t work, he’ll contest the results."

The Atlantic’s “How Donald Trump Could Steal the Election” contends, “The president can’t simply cancel the fall balloting, but his state-level allies could still deliver him a second term.”

Then there’s the Guardian, with "'It's all rigged': Trump foreshadows how he could undermine presidential election," and Salon, with “Investigative journalist Greg Palast: Here's how Trump will steal the 2020 election,” which “explains how the Republican Party has refined its strategy of voter suppression, voter intimidation and vote theft in elections across the country.” (Palast recently published a book titled “How Trump Stole 2020: The Hunt for America's Vanished Voters.”)

But the grand prize goes to the Daily Beast for this headline: "This Is How Republicans Steal an Election, and Maybe Kill Some Dems in the Process."

As usual with the left, it’s all shameless, straight-up projection – accusing conservatives of the very sins and crimes they themselves commit. Remember, it was the Democrats who bitterly complained before the 2016 election that Trump would never accept the results – and then, when they lost, spent the next four years hysterically and illegally attempting to overturn that election, ripping the nation apart in the process.

During every election cycle, Democrats reflexively accuse Republicans of racist-motivated "voter suppression," simply because the GOP believes voters should identify themselves before voting, to prove they are actually eligible to cast a ballot. Their latest hoax is the allegation that Trump is stealing mailboxes around the nation to prevent people from voting.

In truth, however, it is the Democratic Party whose entire growth strategy relies on an ever-expanding variety of strategies of voter fraud and abuse, from encouraging non-citizens to vote (which of course is why they fiercely oppose the most sensible voter ID laws); to wanting to lower the voting age to 16; to insisting that incarcerated criminals including mass-murdering terrorists be allowed to vote (Bernie Sanders publicly stated specifically that Boston Marathon bomber Dzhokhar Tsarnaev should be allowed to vote from prison); to demanding universal vote-by-mail; to ballot harvesting; to ridiculously early voting; to abolishing the Electoral College; to same-day registration and much more.

The left’s ultimate get-out-the-vote strategy, of course, is to import into the United States an entirely new population of voters, one not loyal to either America's Constitution or core cultural values, to support Democrats' unconstitutional, un-American and increasingly deranged socialist agenda. Indeed, Joe Biden recently announced that his “immigration plan” would immediately reverse every single thing President Trump has done to stem the flow of illegal immigration, and specifically grant citizenship – which means the right to vote – to 11 million illegal aliens living in the U.S. Statistically, the vast majority of recent immigrants, both legal and illegal, favor Democrats.

Trump might have ‘to be fumigated out of there’

With the epic 2020 election now just around the corner, Democratic Party leaders are firmly on a war footing. If Republicans don’t understand that, they will lose in November.

After all, just consider: If the Democrats and their Deep State and media allies were willing to illegally spy on Donald Trump, charge him with colluding with America’s enemies – essentially treason – while knowing full well it was all a lie; if they were perfectly willing to pervert and corrupt the most powerful and revered institutions of the federal government, from the FBI to the DOJ; if they were willing to conduct transparently farcical impeachment hearings over a phone call they didn’t like; if they are fine with politicizing the coronavirus pandemic (which House Speaker Nancy Pelosi now calls “the Trump virus”) to the point of panicking the public and causing as much anxiety, pain, financial stress, joblessness and misery as possible for political gain; and if they are willing to flat-out lie day after day to the American public – what would they not do now, to defeat Trump in the home stretch of 2020’s do-or-die election?

By repeatedly insisting Trump will not leave office if he loses in November, Democrats are setting a trap: If there is obvious voter fraud – a virtual certainty with universal mail-in voting – or even a serious question arising in one state or another, as in the 2000 Bush-Gore presidential race, the Trump camp will call the foul. And then, right on cue, Democrats and the establishment media will all scream in unison: “See, we told you! We warned you Trump wouldn’t accept the outcome of the election!”

Then they’ll reprise their favorite fantasies of physically dragging Trump out of the White House. Biden recently said that although Trump will "try to steal" the election, he’s "absolutely convinced" the military will remove Trump from the White House if necessary. And Pelosi, who of late has become preternaturally vicious in her rhetoric, said Trump might have “to be fumigated out of there” – as though the president of the United States is a cockroach or vermin.

Remember the rule: The Democrats compulsively telegraph their agenda by accusing their enemies – and yes, “enemies” is how they think of Donald Trump and his supporters – of committing the very crimes and corruption of which they themselves are spectacularly guilty.

Because in truth, despite Democrats’ and their media allies’ pretend angst over Republican “voter suppression,” it is the maniacal left that is fully intent on using every weapon possible to steal the 2020 election – not from Donald Trump, but from the American people.

One final thought: Although of course we don’t yet know who will win in November’s election, one thing is for sure. If the integrity of America’s elections is destroyed because of the left’s insatiable obsession with obtaining power at all costs, then the great “American experiment” will finally be at an end. For if no one believes his or her vote really counts any more, the United States of America will have ceased to exist as a functioning, prosperous and free society. 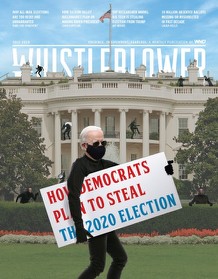 Editor’s note: To explore this subject more deeply, see the current issue of WND’s acclaimed Whistleblower magazine, edited monthly by David Kupelian, titled “HOW DEMOCRATS PLAN TO STEAL THE 2020 ELECTION.” The issue is also available in state-of-the-art digital form. Better yet, SUBSCRIBE TO WHISTLEBLOWER (print edition) and get 12 fantastic issues or else get an ANNUAL DIGITAL SUBSCRIPTION.