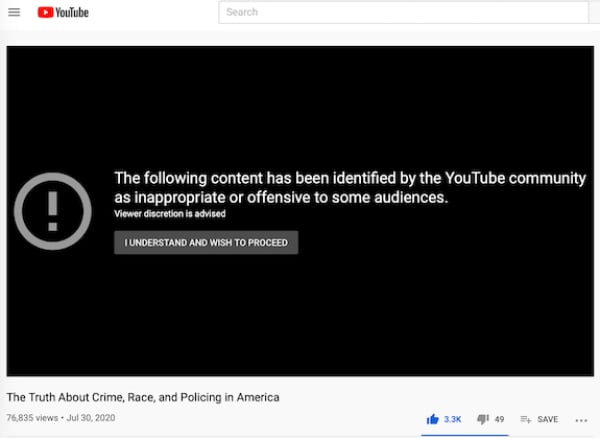 The host of the event, the Center for the American Experiment, pushed back, and YouTube restored the video but slapped an age restriction on it.

Now, following Mac Donald's interview Thursday night with Fox News' Tucker Carlson, anyone who wants to watch the video is presented with a black warning screen.

"The following content has been identified by the YouTube community as inappropriate or offensive to some audiences," the warning states. "Viewer discretion is advised."

John Hinderaker, the president of the think tank and a contributor to the popular Powerline blog, asked Friday what exactly the warning means.

"They got a complaint from a lefty? Two lefties?"

At the time this article was posted, the video had 4,300 likes and only 52 dislikes.

"So it appears," Hindraker observed, "that the 'YouTube community' overwhelmingly approves of the video. Unless YouTube takes the position that conservatives are not part of its 'community.'"

He wondered, too, if the "audiences" who found the content "inappropriate or offensive" are people "who are afraid of the truth."

"Viewer discretion is advised," he said, apparently because "Heather's speech is too hot to handle."

Mac Donald, who has testified to Congress, contends the Black Lives Matter narrative that "policing in the U.S. is lethally racist" is refuted by three types of evidence: the raw numbers, individual cases such as George Floyd's and academic research.

Watch: My interview with @TuckerCarlson last night on YouTube’s removal of a recent livestreamed lecture I gave. Apologies for the brief audio issue! pic.twitter.com/OwXGOt53rg