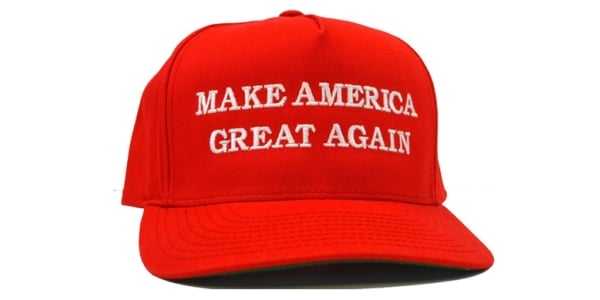 Two women who appeared in a viral video lashing out at supporters of President Trump and stealing a red "Make America Great Again" hat from a child have been indicted on a long list of charges, including felony hate crimes.

The two were seen in the video damaging signs and snatching a red MAGA hate from a group of Trump supporters who were protesting the nomination of Joe Biden at the Democratic National Convention last month.

After Winslow stole the hat, a boy is heard in the video saying, "That's somebody else's hat."

Later a man trying to retrieve the hat is punched by one of the women, who later tosses the hat over a fence.

The video posted by Students for Trump on Twitter has been seen millions of times. Among those who shared it was Donald Trump Jr.

The charges carry possible penalties of up to 15 years in prison.

"Harming another person – let alone a child – because of the expression of their views betrays the principles on which our country was founded," she said.

State law prohibits "interfering with the victim’s free exercise or enjoyment of any right, privilege or immunity protected by the First Amendment to the United States Constitution."

At one point the woman who was victimized says "Are you destroying my property?"

One of the offenders admitted, "Yes, we are."

The attack happened just outside the venue where Biden accept the Democrats' nomination for president.

The International Business Times reported it happened when Trump supporters arrived at the Chase Center in Wilmington, Delaware, where Joe Biden accepted his party's nomination.

"The clip starts off with one of the women, wearing black, dragging what appears to be a 'Creepy Joe' sign with her feet along the pavement of the parking lot," the report said.

The mother of the boy, Riley, tells the women, "Get off my property! Are you destroying my property?"

One of the women states, "Yes, we are," and she and her companion rip up the sign and hurl it at the mother.

At the end of the video, one of the women throws a swing at a man the mother has asked to help.

"The video ends with the woman in black approaching the mother and assaulting her," the report said.