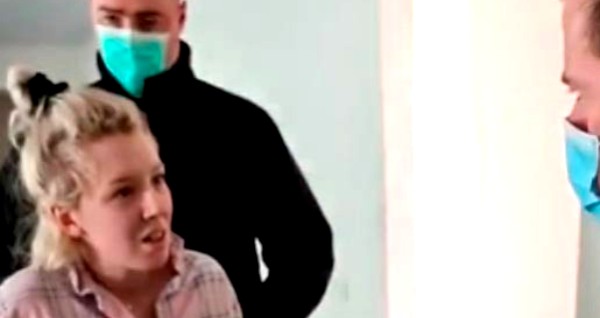 The arrest Wednesday by police in Australia of a pregnant woman in her home over a Facebook post promoting an anti-lockdown protest has prompted national outrage.

Video of Zoe Buhler, 28, being handcuffed in front of her children and partner was posted on the woman's Facebook page.

The resident of Miners Rest, a suburb of Ballarat, northwest of Melbourne, was charged with incitement and granted bail. She is expected to appear in court Jan. 25.

"I'm in my pajamas. I have an ultrasound in an hour," she said.

She began to cry and told officers she would "happily" delete her Facebook posts about the "peaceful, freedom day" protest scheduled for Saturday.

But police told her, "You've already committed the offense."

A description of the event said: "As some of you may have seen government has gone to extreme measures and are using scare tactics through the media to prevent the Melbourne protest. Here in Ballarat we can be a voice for those in stage four lockdowns."

Should people be arrested for inviting others to protest lockdowns on social media?
5% (26 Votes)
95% (548 Votes)

Buhler wrote that attendees must follow restrictions such as wearing masks and social distancing "so we don't get arrested."

This is what an evil tyrannical government looks like, be warned it might be already too late for many people.

This is a pregnant mom of two being arrested having her computers confiscated for making a Facebook post! pic.twitter.com/qbb0oFsKoy

Daily Mail Australia reported similar protest events are planned for Melbourne as anger grows over the state of Victoria's draconian stage four lockdown, which restricts people to their homes with few exceptions and includes a nightly curfew.

Ballarat is at a lower level of restriction, stage three, in which religious services of any size are banned, weddings can have a maximum of five people (the couple, two witnesses and the celebrant), and funerals are restricted to 10 mourners plus people required to conduct the ceremony.

Sky News host Rowan Dean, calling Buhler's arrest a "national day of shame," said he was bombarded with calls from people all over Australia "absolutely horrified by that video."

"Scott Morrison, enough is enough, step in now, boot this clown Andrews out of the National Cabinet," he said.

"Finally stand up and say we are not going to have pregnant women arrested in their own homes for posting online a legitimate political point of view," he said. "Scott Morrison show some bloody leadership."

"Thankfully I am not the only Australian who thinks this is appalling, disgusting and disgraceful," he wrote on his Facebook page. "The only person guilty of incitement is the Premier of Victoria."

Victoria Police told Daily Mail Australia that anybody thinking of "attending the protest ... can expect a swift and firm response from police."

"We will have no hesitation in issuing $1,652 fines to anyone who is breaching the restrictions on the day, or making arrests if necessary."

The police claimed the protest would put lives at risk.

See a report from 9 News Australia: