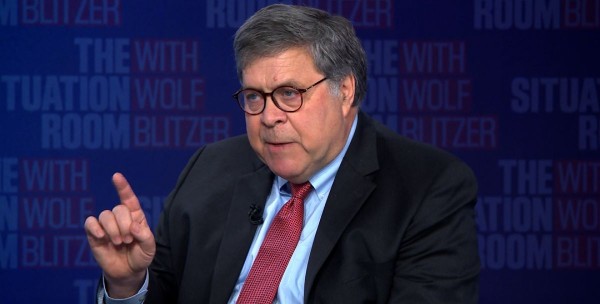 Blitzer quoted the charge of the father of Jacob Blake -- who was shot by a police officer Aug. 23 in Kenosha, Wisconsin -- that the country has "two justice systems," one for whites and another for blacks.

He argued the data show it's "very rare for an unarmed African American to be shot by a white police officer."

"There were 10 cases last year; six of them the suspect was attacking the police officer physically," he said. "So they are rare things compared to the 7,000 to 8,000 young black men who are killed every year [by other blacks]."

Barr said "the word 'systemic' means that it's built into the institution, and I don't think that's true."

"I think our institutions have been reformed in the past 60 years, and if anything has been built-in, it's a bias to nondiscrimination and safeguards against that," the AG said.

Barr said "we need to be careful about throwing the idea of racism around."

"Racism usually means that I believe that because of your race you're a lesser human being than me," he explained. "I think there are people in the United States who feel that way, but I don't think it is as common as people suggest. And I think we have safeguards to ensure that it doesn't really have an effect on someone's future."

"Why in this nation do black Americans wake up knowing that they could lose their life in the course of just living their life?" Biden asks in the ad.

See Barr's remarks in the CNN interview about the Blake case and "systemic racism":

Barr said he believes the nation has made considerable progress on racial relations in the past 60 years.

"To listen to the American left nowadays, you’d think we have gotten nowhere," he said.

Barr said there does "appear to be a phenomena in the county where African Americans feel that they are treated, when they are stopped by police frequently, as suspects before they are treated as citizens."

"I don't think that necessarily reflects some deep-seeded racism in police departments or in most police officers," he said. "I think the same kind of behavior is done by African-Amerian police officers."

He said there are "some situations where statistics would suggest they are treated differently, but I don't think that that's necessarily racism."

"Does that make him a racist?"

He said there is more progress to be made and more reform that can be done, but "the demonization of the police and the idea that this is so widespread, an epidemic, is simply wrong."

Joe Biden: "Why in this nation do Black Americans wake up knowing that they could lose their life in the course of just living their life?"

WND reported Wednesday that two anti-police protesters found out first-hand that the split-second decisions many officers face when they are resisted by a suspect aren't so easy. They agreed to accept the challenge of a Portland, Oregon, radio station to go through a shoot/don't shoot training session at the Clackamas County Sheriff's training center.