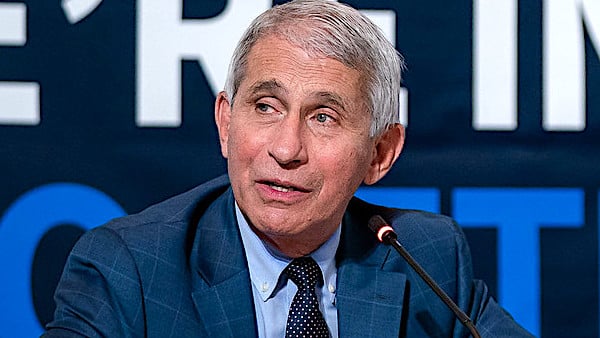 Reacting to claims in Bob Woodward's upcoming book that President Trump downplayed the deadliness of the coronavirus to the public, Dr. Anthony Fauci said Wednesday in an interview he heard Trump say the same thing in public he was saying in private.

"I didn't really see any differences between what he told us and what we told him, and what he ultimately came out publicly and said," said Fauci in an interview with Fox News' John Roberts."

According to Woodward's "Rage," set for release Sept. 15, Trump acknowledged the deadliness of the coronavirus in early February and admitted in March to playing down its severity.

Roberts asked the White House coronavirus task force adviser if he "had a sense that [Trump] was or wasn't playing this down."

"No, no, I didn't. I didn't get really a sense that he was distorting anything. I mean in my discussions with him, they were always straightforward about concerns that we had," said Fauci, the director of the National Institute of Allergy and Infectious Diseases.

"We related that to him, and when he would go out, and I would hear him discussing the same sort of things, he would say we just got through with a briefing from the group with the task force and would talk about it."

Roberts noted that the Woodward book quoted Trump saying on March 19: "I wanted to always play it down. I still like playing it down, because I don't want to create a panic."

The Fox News guest anchor asked, "Was it your sense that this was serious but the public messaging was a little bit different?"

"You know, John, I really am hesitant to comment because I don't know in what context we're asking that question," Fauci replied. "I mean, obviously, when we would be speaking to the president we talked about the cold facts. We would get them. You know, often he would want to makes sure the country doesn't get down and out about things. But I don't recall anything that was a gross distortion in things that I spoke to him about."

Roberts asked Fauci about a passage in in which Woodward describes Fauci, according to the Washington Post, telling others that "the president is on a separate channel and unfocused in meetings with 'rudderless' leadership."

The Post reported Woodward wrote Fauci told others Trump's "attention span is a minus number. His sole purpose is to get reelected."

"Is that correct?" Roberts asked.

"So, you know, I don't really want to get involved in that kind of stuff. That is very distracting to the kind of things that I'm trying to do and that we're all trying to do with this outbreak."

Roberts followed up: "So you would question that account?"

Roberts, Fox News' chief White House correspondent, turned to the news about AstraZeneca suspending trials for a coronavirus vaccine because of an adverse reaction from one person.

Fauci said the adverse effect was "unfortunate," but "in some respects it shows that the system works."

"In other words, the checks and blanaces that you have when you do a trial with a large number of people that's carefully watched and carefully controlled," he said.

The question is whether it's a "one-off" or "something that is real and we have to pay attention to."

Fauci said it's likely that after pausing the trial and investigating the adverse reaction, the researchers will cautiously continue.

Regarding children returning to school, he said the issue should be addressed locally.

"You can't look at the United States in a unidimensional way," he said.