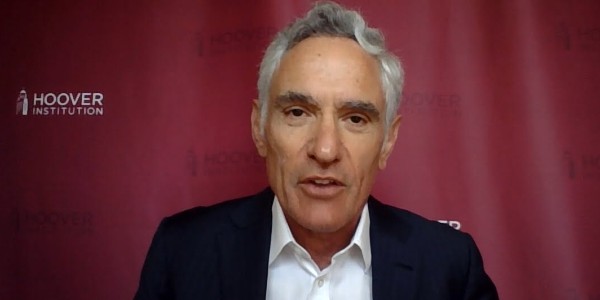 YouTube has censored a video of an interview by Stanford's Hoover Institution with Dr. Scott W. Atlas, who is now a White House coronavirus task force adviser.

Atlas, a senior fellow at the Hoover Institution, argued in the June 23 interview for an end to the lockdowns and closings.

The interview can still be viewed on the Hoover Institution website along with a transcript.

Atlas was a professor and the chief of neuroradiology at Stanford University Medical Center.

Jonathan S. Tobin, writing for the Federalist, said it's indefensible to censor "a video from a widely respected think tank in which Atlas discussed a data-driven analysis of the catastrophic impact of the lockdowns."

"Atlas didn't deny the seriousness of the disease or the need to act to prevent its spread — he merely questioned the efficacy of broad lockdowns," Tobin wrote. "Atlas pointed out the resulting creation of acute economic distress as well as other unintended consequences that compromised public health such as the decrease in doctor visits or treatments for other potentially fatal conditions as well as the effects of school closings on childhood development as well as upticks of abuse."

Tobin said the "idea that any discussion of these issues can be shut down with a single click makes the question of regulating the untrammeled censoring power of a global tech monopoly like Google all the more important."