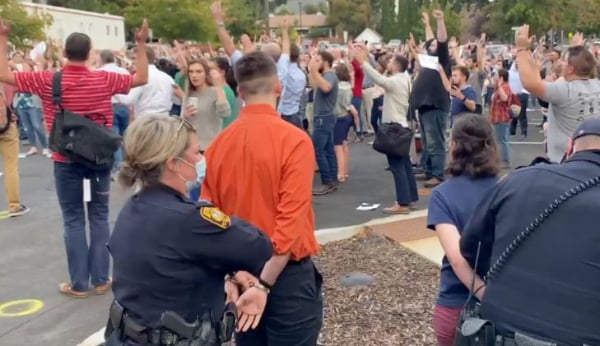 Three Christians participating in a "psalm sing" peaceful protest outside the city hall of a small Idaho town were arrested for not wearing a mask.

With as many as 300 unmasked singers gathered on Wednesday, according to the pastor who organized the rally, police began to make arrests for failing to wear masks as mandated by the Moscow City Council.

Members of Christ Church in Moscow, Idaho, were joined by others in opposition to the city council's extension of a mandatory mask order until January, PJ Media reported.

That's despite the fact there have been no deaths or even hospitalizations due to the COVID-19 virus in Latah County.

The church's pastor, well-known Christian theologian Douglas Wilson, wrote on his blog after the event that it was "not an assembly of scofflaws."

"It really was a peaceful protest, a petition to our city government for a redress of grievances, and a religious assembly, all in one," he said. "Everything about it was proper. We sang three songs and the doxology, and then went home."

Wilson noted that on the day the city council voted to extend the mask order, Moscow's mayor presided over an outdoor wedding and did not wear a mask, PJ Media reported. Nor did a city council member who was allegedly in attendance.

Latah County commission candidate Gabriel Rench was led away in handcuffs as the group sang, "Some always trust in chariots, others trust in horses, but we recall our Lord and God."

Four others were cited for being in violation of the masking/social distancing order, the Moscow-Pullman Daily News reported. Two were arrested and charged with resisting or obstructing an officer. Rench was arrested for refusing to identify himself to police but was not charged.

Rench said on an episode of his "CrossPolitic" show that police had learned of the rally ahead of time and prepared by painting social-distancing circles on the parking lot.

Wilson wrote on his blog: "We have every right to protest the high hypocrisy involved in all of this. Not only so, but I believe we have a responsibility to do so."

He quipped that the protest was not conducted "Portland style."

A guest on Rench's show, David Shannon, who is black, argued that Moscow police did nothing when Black Lives Matter held a "Defund the Police" rally in July in front of the police station, violating both masking and social distancing orders.

Shannon compared the arrests of the peaceful protesters on Wednesday to the civil rights movement.

Instead of being told to go to the back of the bus, he said, Christians are forced to stand in circles and told they must limit the size of their church services.

"This is ridiculous. We, just 60 years [ago], went through this and we’re back facing it again?"

Wilson vowed there will be more protests if the mask mandate continues.

Shannon said churches must act now to protect their liberties.

"Look, if you are not doing this, you’re going to have to face a moment where you have to. You might as well start doing it now," he said. "Everybody should go to their city hall with the psalter. Start singing ‘Amazing Grace’ there."

Critics of the mask mandates have argued that while they may impede the spread of the virus in certain instances – such as when someone sneezes – many studies have shown them to be ineffective, and health officials have warned they could actually help spread the virus.

U.S. Surgeon General Jerome Adams, for example, tweeted in February: "Seriously people – STOP BUYING MASKS! They are NOT effective in preventing general public from catching #Coronavirus, but if healthcare providers can't get them to care for sick patients, it puts them and our communities at risk!"

The White House's top coronavirus adviser, Dr. Anthony Fauci, said in an interview with "60 Minutes" in March: "There's no reason to be walking around with a mask." It may block a droplet he said, but it's "not providing people the perfect protection that people think that it is" and can itself cause infection.

Adams said in February the science suggested that "there was not a high degree of asymptomatic spread."

And he later said the CDC, World Health Organization and a New England Journal of Medicine article in May all indicated that masks were not effective.

But both Adams and Fauci now are insisting everyone should wear a mask.

Explaining his reversal, Adams said "science is about giving the best recommendations you can and when you learn more, you change those recommendations."

"Our recommendations have changed and now people of America – important to know, you should wear a face covering," he said in July.

"It's important for people to understand that once upon a time we prescribed cigarettes for asthmatics, and leeches and cocaine and heroin for people as medical treatments. When we learn better, we do better," Adams said.

Fauci also argued that the guidance changed as the information about the virus changed.