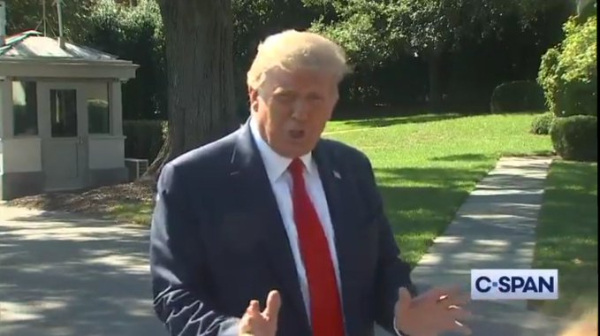 President Trump speaks to reporters on the South Lawn of the White House on Sept. 30, 2020 (Video screenshot)

Speaking to reporters as he prepared to depart for Minnesota for a campaign rally, President Trump corrected widespread misreporting of his comments during the debate Tuesday night regarding white supremacists and the group Proud Boys.

Trump was asked what he meant when he said that the Proud Boys should "stand back and stand by."

Media took Trump's use of the term "stand by" to mean they should wait for his command to attack. But Trump clearly meant "stand down," as it was the term moderator Chris Wallace used in his question. And headline after headline falsely declared that Trump refused to deny white supremacists.

In fact, Trump was responding to a question from Wallace asking if he would be "willing to condemn white supremacists and militia groups."

The focus on getting Trump to condemn white supremacy was fueled by Wallace and Biden repeating the false claim that Trump said after the Charlottesville riot that neo-Nazis and white nationalists were "very fine people."

In fact, it was one of many occasions in which Trump explicitly condemned white supremacists. But Biden says it was that moment that prompted him to run for president.

Media on Wednesday seized on a Proud Boys organizer, Joe Biggs, celebrating that the president gave the group a "shout out" and using "stand back and stand by" as a new slogan.

On Wednesday, on the South Lawn of the White House, a reporter asked Trump if he misspoke when he said on Tuesday night "stand by."

Trump said Antifa "is a real problem, because the problem is on the left and Biden refuses to talk about it."

"He refuses to issue the words 'law and order.' And you saw that last night when he choked up. He can’t say the words because he'll lose the rest of the left. So he's got to condemn Antifa. Antifa is a very bad group.

"I've always denounced any form ... any form of any of that, you have to denounce."

He noted that Biden during the debate insisted Antifa is an idea, not an organization