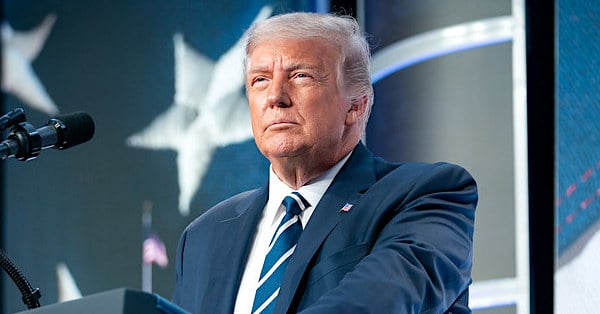 President Trump on the 19th anniversary of the 9/11 terrorist attacks paid tribute to the crew and passengers of Flight 93 who prevented the hijacked jetliner from heading to Washington, D.C.

"The terrorists on Flight 93 had a fourth target in mind," he said at  a ceremony at the Shanksville, Pennsylvania, memorial site.

"It was called: our nation’s capital. They were just 20 minutes away from reaching their sinister objective. The only thing that stood between the enemy and a deadly strike at the heart of American democracy was the courage and resolve of 40 men and women – the amazing passengers and crew of Flight 93."

He named some of the passengers.

"Donald and Jean Peterson were grandparents traveling to vacation in California. Deora Bodley was a student headed back to college. Richard Guadagno was returning from celebrating his grandmother’s 100th birthday. Lauren Catuzzi Grandcolas was three months pregnant with her first child. Every passenger and crewmember on the plane had a life filled with love and joy, friends and family, radiant hopes and limitless dreams."

Trump said that when the the plane was hijacked, "they called their families and learned that America was also under attack."

"Then they faced the most fateful moment of their lives. Through the heartache and the tears, they prayed to God, they placed their last calls home, they whispered the immortal words, 'I love you.' Today, those words ring out across these sacred grounds, and they shine down on us from Heaven above.

"When terrorists raced to destroy the seat of our democracy, the 40 of Flight 93 did the most American of things: They took a vote, and then they acted. Together, they charged the cockpit, they confronted the pure evil, and in their last act on this Earth, they saved our capital."

Trump, at that time, was a real estate developer in New York. He was interviewed by a German television outlet after visiting Ground Zero the day after the attack.

He said at the time the country needed to respond by finding out who orchestrated the attack and then "go after these people."

Secondarily, he said, the site needed to be rebuilt with something "just as majestic."

He said he already had dispatched hundreds of his own workers to help with the cleanup.

On Friday in Pennsylvania he resolved to "never, ever forget."

"Our sacred task, our righteous duty, and our solemn pledge is to carry forward the noble legacy of the brave souls who gave their lives for us 19 years ago," he said. "In their memory, we resolve to stand united as one American nation, to defend our freedoms, to uphold our values, to love our neighbors, to cherish our country, to care for our communities, to honor our heroes, and to never, ever forget."

Nearly 3,000 people of many races and creeds, including some 400 first responders, were murdered by Islamic terrorists. Fifteen of the 19 hijackers came from Saudi Arabia.

"America will never relent in pursuing terrorists that threaten our people," Trump said. "Less than one year ago, American warriors took out the savage killer and leader of ISIS, Al-Baghdadi. Soon after, our warriors ended the brutal reign of the Iranian butcher who murdered thousands of American service members. The world’s top terrorist, Qasem Soleimani, is dead."

He said the "men and women of Flight 93 were mothers and fathers, sons and daughters, husbands and wives."

"Nothing could have prepared them for the dreadful events of that morning. But when the moment came, when history called, they did not hesitate, they did not waver. Forty towering patriots rose up, took charge, made their stand, turned the tide, and changed the course of history forever."