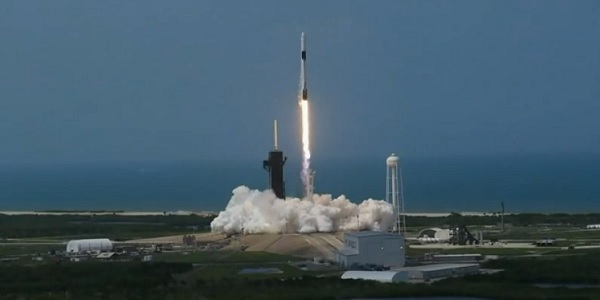 For 30 years, the United States allowed its once dominant position in space to erode. A succession of political leaders from both parties have either ignored or actively worked against maintaining and expanding America’s hard-won place in space. Because of these short-sighted policies, the United States is engaged in a Second Space Race with China (which it is losing) and its critical satellite constellations could be vulnerable to a “Space Pearl Harbor” from either Russia or China.

Donald Trump changed this decline in our space capabilities. He was the only candidate in my lifetime who spoke meaningfully about the need to return astronauts to the moon and then go beyond to Mars. Trump wanted to create a new branch of the United States Armed Forces, the Space Force, to better protect America’s vulnerable satellites from attack. The president also called for “space dominance” to ensure that no other country — notably China — could challenge the United States in the critical strategic domain of space ever again.

Under Trump, the United States has a strategy for winning the Second Space Race and defending its critical satellite constellations from attack. What’s more, the Trump administration is making it easier for American innovators to reap the untapped rewards of developing space (there is, for example, a minimum $1 trillion industry in space mining waiting to be enjoyed by the country that captures this vital market first).

This was a stark change from the last three decades of U.S. space policy. Under the Obama administration, NASA terminated the space shuttle program without having a viable replacement. This, in turn, forced the United States to rely on Russia, of all countries, to launch American astronauts into orbit. Meanwhile, China giddily enhanced its own capabilities to better compete (in an effort to ultimately displace the United States from its dominant place in orbit).

Under Obama, NASA turned inward. Whatever funds were made available to the space program either went to entirely terrestrial pursuits, like addressing global warming, or robotic missions into deep space that would take decades to achieve anything meaningful. While the latter are important, they would never capture the imagination of Americans the way that the manned spaceflight program could.

Should Joe Biden win the presidency in November, U.S. space policy will return to the same turgid place it was during the Obama years. In 2008, when Biden was tapped to be Barack Obama’s running mate, his big idea for space policy was to have NASA conduct joint space missions with China. Of course, China had been barred from partaking in the International Space Station in 2000 by the Clinton administration because policymakers at the time feared China would attempt to steal American technology. In this case, it was fortunate that Obama was largely uninterested in the space program. Because of that indifference, even Biden’s harebrained scheme — which would have resulted in the greatest tech transfer in history from America to China — was avoided.

If Joe Biden wins in November, though, these (and other) bad ideas will become the nucleus of his administration’s space policy.

In essence, a Biden administration would spell the end of what has become a very promising period in America’s space program, thanks to President Trump’s leadership and vision. Biden’s policies will weaken the United States, empower China, and cede the all-important strategic high ground that protects America’s vulnerable satellite constellations. A vote for Biden in November would inevitably relegate the United States to second-class status on Earth as it loses its vaunted dominance in space, once and for all.

Brandon J. Weichert is the author of “Winning Space: How America Remains a Superpower,” due out Sept. 15 from Republic Book Publishers. He can be followed via Twitter @WeTheBrandon.