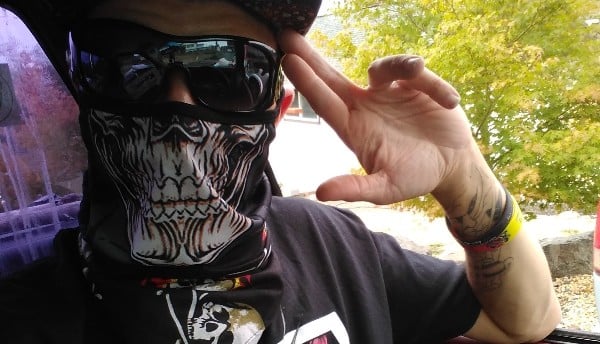 Amid criminal investigations into the origin of many of the fires that have devastated communities in Washington, Oregon and California, a 36-year-old man with a history of radical activism has been arrested.

Jeffrey Acord was arrested Wednesday for setting a brush fire near a freeway in Puyallup, Washington, south of Seattle.

In 2014, he was arrested during protests of the Michael Brown decision with a cache of weapons, ammunition and explosive materials in his backpack and vehicle.

KOMO-TV in Seattle reported at the time that investigators said Acord was seen reaching under a car with a road flare. Among the weapons in his possession were a 7-inch knife, an assault rifle, a shotgun and a box full of large fireworks.

On Wednesday, it was Acord who called 911 to report a fire on the side of State Route 167. He then began streaming on his Facebook page, noted the blog Protester Privilege. A police officer can be heard questioning Acord, and the video ends with his arrest for second-degree reckless burning.

The fire was contained to the highway and put out by the local fire department.

Accord is seen at a Black Lives Matter protest in a video posted on his Facebook page:

Meanwhile, the origin of fire in Southern Oregon that decimated the towns of Talent and Phoenix is under criminal investigation, reported OregonLive

The fire was rumored to have been set by Antifa, but Ashland Police Chief Tighe O'Meara said the evidence indicates otherwise.

"One thing I can say is that the rumor it was set by Antifa is 100% false information," the police chief told OregonLive by email. "We have some leads, and none of it points in that direction."

The Almeda Glendower Fire, which started Tuesday, has burned about 600 homes and more than 3,000 acres of private land.

Another 35,000 homes were threatened along with Interstate 5, Oregon route 99, schools, a fire station, parks, small businesses and transmission and communication lines.

In Sonora, California, a transient man was arrested for felony arson.

Law Enforcement Today reported law enforcement up and down the West Coast have been put on alert for "opportunists" seeking to exploit the dry conditions and high temperatures.

On Monday in Spokane, Washington, Christine Comello, 36, was arrested after allegedly starting multiple fires. She was booked for second degree arson, first degree arson and burglary.

In Eugene, Oregon, Elias Newton Pendergrass, 44, was arrested on Tuesday for allegedly starting a wildfire that burned nearly 400 acres and caused evacuations west of Eugene.

A middle-aged man is believed to have set a fire Wednesday in the state park in Dexter, Oregon.

Dexter Rural Fire Chief Matt Peterson wrote on Twitter of the incident: "I don't ever do this, but this is ridiculous!!!"

In Salinas, California, 37-year-old Anita Esquivel, is in the Monterey County Jail for allegedly starting fires along Highway 101.