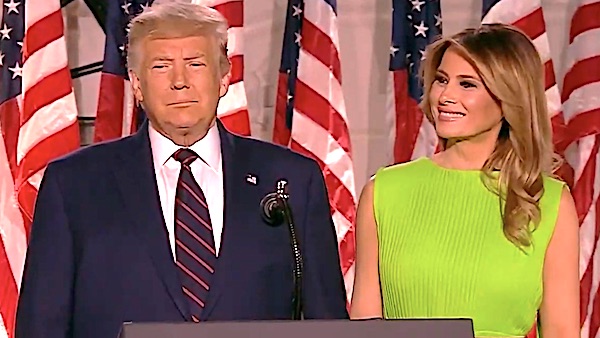 Several warnings already have been issued that more violence is coming to America if President Trump is reelected.

Now, a contributing writer for The Atlantic is doubling down, writing on Twitter that "even strictly law-and-order Republicans have an interest in Biden winning."

Why would Republicans want to elect a Democrat?

Mass unrest would ensue with a Trump victory, because the left will have "difficulty accepting the results," wrote Shadi Hamid in a tweet he later removed.

The deleted tweet was captured by the blog Twitchy, which also posted a later tweet from Hamid promoting his article in The Atlantic.

"Try imagining how millions of Democrats will process a Trump victory," Hamid wrote. "A loss for Biden, after having been the clear favorite all summer, would provoke mass disillusion with electoral politics as a means of change. No one should want that."

Try imagining how millions of Democrats will process a Trump victory. A loss for Biden, after having been the clear favorite all summer, would provoke mass disillusion with electoral politics as a means of change. No one should want thathttps://t.co/i6YrArSlhI pic.twitter.com/CF6Ul7tTRw

"If Democrats can't beat a candidate as unpopular as Trump during a devastating pandemic and a massive economic contraction, then are they even capable of winning presidential elections anymore?"

The Twitchy blogger noted "the left has gotten it into their heads that threatening Americans with more violence if they don’t vote the way they want them to seems like a winning strategy."

One Twitter user wrote: "So, vote for Biden or his brown-shirts will burn the country down? I would recommend you rethink that threat."

Hamid wrote in his article that he's "truly worried" about the possibility of Trump winning and that "Democrats and others on the left will be unwilling, even unable, to accept the result."

He pointed out that Democrats "had enough trouble accepting the results of the 2016 election."

He explained the left's thinking: "How could so many of their fellow Americans side with a racist and a fabulist, someone so callous and seemingly without empathy? It was easier to think that those Americans had been lackeys, manipulated and deceived, or that they simply hadn’t understood what was best for them. Moreover, the Russians had interfered, and tipped the balance in an extremely close election through propaganda, fake news, and collusion with the Trump campaign. Perhaps, as former Senate Minority Leader Harry Reid suggested, the Russians had even tampered with the vote itself."

Biden's poll numbers mostly have been higher than Hillary Clinton's were in 2016, but recently, he and other analysts have started panicking.

"Democrats have every right to be nervous," he said.

A Trump re-election "has implications for mass unrest and political violence across American cities."

Similar statements were made in a guest op-ed by Georgetown Univeristy professor Rosa Brooks published by the Washington Post.

Talk-radio host Rush Limbaugh said not only is the Post trying to "frighten" voters into opposing the president, "they're threatening you."

Brooks is the convener of the Transition Integrity Project, which describes itself as a bipartisan group of more than 100 current and former senior government and campaign leaders, academics, journalists, polling experts and former federal and state government officials formed out of concern about potential disruptions to 2020 United States presidential election and transition by the RNC.

Limbaugh explained that Brooks built a series of "war games," gathered contributors and then imagined what would happen in a range of election scenarios.

"A landslide for Joe Biden resulted in a relatively orderly transfer of power," Limbaugh said of the results. "Every other scenario that she war-gamed involved street-level violence and political crisis."

He said the implication is that peace will come after months of unrest only if Biden wins in a landslide.

"And what they want you to believe is that you’ll just help get rid of Trump and all this other stuff will go away, that they’ll open up the restaurants in New York and they’ll open up California and they’ll stop whatever they’re doing in Washington and Oregon, and everything will go back to normal if you elect Biden," he said. "Also implied in this, what you’re supposed to infer, is that if Trump wins reelection, this stuff’s only gonna get worse. It’s up to you, it’s up to you, America. Do you want your country constantly in chaos? Do you want the radical left taking over? If you do, then you just keep supporting Donald Trump.

"They’re just coming right out and telling you now that if Biden does not win, and in a landslide, meaning it better be doubtless, it better be no question about it, if Biden doesn’t win in a landslide, then your country is going to be violent, violent, violent 24/7. And they published this at the Washington Post, which means they stand behind it."

Limbaugh said the message is: "Biden has to win and in a landslide. Otherwise there is peace for nobody."

Also, a coalition of progressive groups supporting the Democratic Party are planning to "threaten their way to the White House, warned the Washington Free Beacon's editorial board.

The SEIU, AFT, Color of Change, Indivisible, MoveOn, Demos and others are organizing for "mass public unrest," according to the Daily Beast.

"Occupy s---, hold space, and shut things down, not just on Election Day but for weeks," the groups instruct.

The Free Beacon observed that only "a fool would think that this 'nonviolent civil disobedience' will stay nonviolent after a summer that's seen over 500 riots across the nation."

The plan revealed to "a sympathetic outlet" is the "latest example of the left's campaign of extortion: If you want the protesting, rioting, and murder wave to end, all you have to do is hand Joe Biden a landslide," the editors wrote.

"The organizations claim to be preparing for an election 'without a clear outcome,' or the possibility that President Donald Trump refuses to concede. Of course, they have also worked to assure an ambiguous election night by pressing for a massive, disorganized switch to mail-in voting, even as public health experts say in-person voting is as safe as grocery shopping," the editorial said.

"Both the promised unrest and the scaremongering over the possibility Trump will not concede are part of the same drumbeat that Democrats have marched to over the past four years: Trump, and indeed the entire GOP, are not just bad but illegitimate."

It's why Hillary Clinton already has told Joe Biden not to concede, no matter what.

But the Democrats want to convince voters of a looming coup d'etat, and the danger is an "act of treason" by Democrats, the Free Beacon editors contended.

Democrats are ginning up a variety of unsettling and unlikely scenarios "because their electoral strategy is to use these as an excuse to threaten more rioting in the streets – whatever they need to do to retake power."

It's really "a campaign by insurgent ideological groups to threaten and intimidate their way to victory" and "nothing less than electoral terrorism."