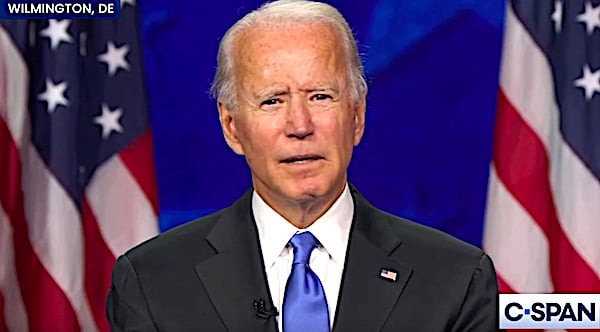 Evangelical Christians played a large role in President Donald Trump's election in 2016, and they likely will provide significant support again in 2020.

Democratic nominee Joe Biden is trying to cut into that bloc, contending he is a faithful Catholic.

But he's not, according to an editorial at Richard Viguerie's ConservativeHQ.com.

"Democrat Joe Biden has built his half-century in politics largely on the myth that he is a faithful Catholic with working class roots. In reality Biden is neither a faithful Catholic, nor a friend of America's blue-collar citizens," the unsigned editorial said.

Two of the primary positions Biden's campaign holds is that Catholics "must be forced to be complicit in the sin of abortion by repealing the Hyde Amendment prohibiting taxpayer funding of abortion."

Secondly, taxpaying Catholics "must likewise be forced to be complicit in the sin of transgenderism by being forced to subsidize taxpayer funded gender reassignment surgery."

The authors quoted a LifeSiteNews report citing Cardinal Raymond Burke of the highest Vatican court, the Supreme Tribunal of the Apostolic Signatura.

Burke concluded that "so-called 'Catholic' politicians, including Democratic presidential candidate Joe Biden, must be denied communion for advocating policies contrary to natural law and basic church teaching, including on topics such as abortion and homosexuality."

Burke said: "They may not present themselves to receive Holy Communion, because they’re not in communion with Christ. It’s not a punishment. Actually, it’s a favor to these people to tell them don’t approach, because if they approach, they commit sacrilege."

The problem of such politicians representing themselves as "Catholic" and "pro-abortion" at the same time has gotten so bad that "many non-Catholic leaders of government believe that the church has changed her teaching on these matters," the editorial said.

Biden has faced criticism from Catholic leaders for many years. In 2006, Wilmington Bishop Michael Saltarelli suggested the high school where Biden attended should not name a student center after him. Saltarelli cited the U.S. Conference of Catholic Bishops stating Catholic institutions "should not honor those who act in defiance of our fundamental moral principles."

"If, as Sen. Biden said, ‘I’m prepared as a matter of faith to accept that life begins at the moment of conception,’ then he is not merely wrong about the science of new life; he also fails to defend the innocent life he already knows is there," Chaput said.

In 2008, after taking communion, Biden received a letter from Bishop John Ricard pointing out the Democrat's support "for laws that fail to protect the unborn, a profound disconnection from your human and personal obligation to protect the weakest and most innocent among us: the child in the womb."

The editorial said Democrats "know that the biggest threats to their socialist agenda are observant Catholics and other people of faith who hold traditional values and cannot accept their radical agenda."

The agenda includes taxpayer-funded partial-birth abortion on demand, opposing school prayer and religious symbols in public, advocating men in women's bathrooms, rejecting tax-exempt status for churches that preach against abortion, forcing small businesses to act against their faith and opposing the granting of tax-exempt status to Catholic Schools.

Biden's support for abortion and same-sex marriage puts him "in direct conflict, not with some ephemeral policies of church administration, but with the fundamental precepts of Catholicism that make a Catholic a Catholic."

The argument for saving Lebanon