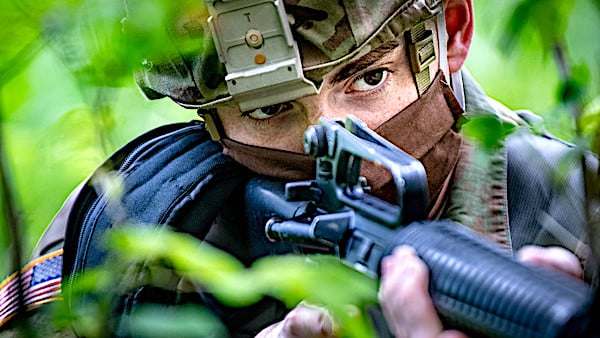 After two Los Angeles sheriff’s deputies were shot and critically wounded on Saturday, Joe Biden warned, “Weapons of war have no place in our communities." And within just hours of the attack, Biden tweeted in praise of the original bans on assault weapons and high-capacity magazines, which lasted from 1994 to 2004. “These bans saved lives, and Congress should never have let them expire,” he wrote.

A handgun, not an assault rifle, was used to shoot the deputies. But it seems that Biden never misses an opportunity to deceptively complain about “weapons of war.”

In the past, Biden and vice presidential nominee Kamala Harris have applied this label to AR-15 semi-automatic rifles.  But these guns function exactly as small-game, semi-automatic hunting rifles. Though it looks like the M16 machine gun made famous in the Vietnam War, no military in the world uses the AR-15.

Gun control advocates commonly pose the question: "Why do people need a semi-automatic AR-15 to go out and kill deer?" The answer is simple: It is a hunting rifle. It has just been made to look like a military weapon. Semi-automatic weapons are also used to protect people and save lives. Single-shot rifles that require you to physically reload the gun may not do people a lot of good when their first shot misses or fails to stop an attacker. Or, for that matter, if they are facing multiple assailants.

What about Biden’s claims that the assault weapons ban saved lives?

If the ban had any effect, one would think that it would reduce the number of murders committed with rifles. But the percentage of firearm murders that were committed with rifles was at 4.8% prior to the ban starting in September 1994, and averaged 4.9% from 1995 to 2004. In the 10 years after the ban, the figure averaged just 3.9%. This pattern is the opposite of what gun control advocates predicted.

Many academic studies have examined the original federal assault weapons ban.  They consistently found no statistically significant impact on mass public shootings or any other type of crime. Clinton administration-funded research by criminology professors Chris Koper and Jeff Roth confirmed as much in a 1997 report for the National Institute of Justice. “The evidence is not strong enough for us to conclude that there was any meaningful effect (i.e., that the effect was different from zero),” they wrote.  Koper and Roth suggested at the time that it might be possible to find a benefit after the ban had been in effect for more years. In 2004, they published a follow-up NIJ study with fellow criminologist Dan Woods. “We cannot clearly credit the ban with any of the nation’s recent drop in gun violence,” they concluded. “And, indeed, there has been no discernible reduction in the lethality and injuriousness of gun violence.”

Gun control advocates often cite work by Louis Klarevas, but his non-peer-reviewed methodologies are highly flawed. For one thing, Klarevas looks only at the total number of mass public shootings, whether they were committed with assault weapons or with other types of guns. While the share of mass public shootings that utilized assault weapons fell during the ban, it fell even more sharply in the 10 years after the ban ended in 2004. And any reduction that the ban caused in attacks with assault weapons may simply have meant more attacks with other types of guns.

Biden’s tweet also touted large-capacity ammunition magazine bans. Contrary to common perception, ordinary hunting rifles can hold just as large a magazine as "assault weapons.” Any gun that can hold a magazine can hold one of any size. That is true for handguns as well as rifles. Magazines are basically metal boxes with springs, and are easy to make and virtually impossible to stop criminals from obtaining. The 1994 legislation banned magazines that could hold more than 10 bullets, yet had no effect on crime rates.

Biden is making it clear that gun control is near the top of his agenda. So it’s little wonder that gun control zealot Michael Bloomberg just pledged to spend at least $100 million in Florida alone on behalf of the Biden campaign. But no matter how much Biden wishes it were true, guns bans won’t make American’s safer. With Democrats promising to eliminate the Senate filibuster if they win, gun bans will be an integral part of the radical agenda that they will quickly enact. To his credit, Biden is not hiding it.