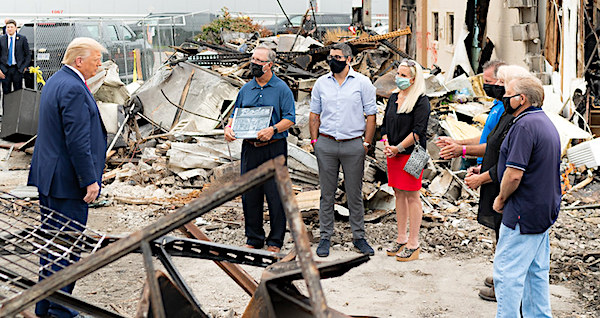 The former vice president and his wife, Jill Biden, will hold a “community meeting” in Kenosha Thursday in hopes that it will “bring together Americans to heal and address the challenges we face,” Axios reports.

The Bidens will then make a stop at an undisclosed location in the city, according to the publication.

“I want a safe America,” he added. “Safe from COVID. Safe from crime and looting, safe from racially-motivated violence, safe from bad cops. Let me be crystal clear. Safe from four more years of Donald Trump.”

Rioting in Kenosha came after Jacob Blake was shot in the back by a police officer, video footage appears to show. Blake’s family said that he is partially paralyzed and the incident has spurred riots and protests for the past several nights in Wisconsin where two people were killed the night of Aug. 25.

President Donald Trump visited Kenosha Tuesday where he met with local leaders about maintaining the city’s safety and viewed the damage to the city caused by nights of rioting.

“Look, we have heard the president over the last couple of days, throughout the Republican National Convention talk about violence … So he’s not going to be a calming voice in Kenosha, Wisconsin, today,” Sanders added. “He’s going to do nothing but fan the flames and pour gasoline on what is already a very tense situation.”

The Biden campaign did not immediately respond to a request for comment from the Daily Caller News Foundation.

WND News Services
These reports are produced by another news agency, and the editors of WND believe you'll find it of interest.
3 members of Congress sue Pelosi over mask fines
S&P 500 falls from a record ahead of big earnings, snaps 5-day win streak
Shark bites man's butt 1 week after a man was killed by a shark at same beach
Charles Barkley: 'The only people who are not vaccinated are just a**holes'
'Critical condition': Billy Graham's grandson hospitalized with COVID
See more...

Officers detail how 'terrorists' attacked them at U.S. Capitol