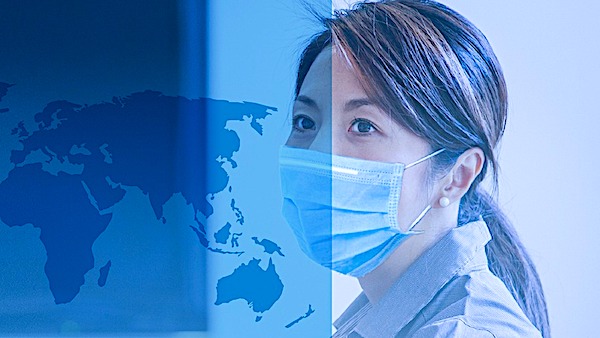 CORRECTION Oct. 11, 2020: Appearances by Dr. Li-Meng Yan on media outlets in Britain and the United States have come under fresh scrutiny in connection with her own pre-print (an unpublished draft of a science paper) on the website Zenodo claiming to provide evidence that SARS-CoV-2, the virus that causes COVID-19, was created in a laboratory and is not of natural origin. Yan's pre-print, which was not peer-reviewed by other experts in the field, claims that some unique characteristics in the SARS-CoV-2 genome prove that the virus is man-made. However, experts disputed Yan's pre-print for being flawed and containing unsubstantiated claims. The exact origin of the SARS-CoV-2 virus remains unknown. Dr. Yan claims to prove that the SARS-COV-2 virus originated in a lab, but a careful analysis of her pre-print actually shows this claim is unsubstantiated.

A virologist who specialized in immunology at the Hong Kong School of Public Health says she has evidence COVID-19 is man-made and plans to publish it soon.

Dr. Li-Meng Yan appeared Friday on the British television program "Loose Women" from a secret location. She said she fled Hong Kong and is now in the United States because her life was threatened. The Chinese government, the doctor said, already has "removed all her information" from government files.

Claims that the virus came from a wet market in Wuhan are a "smoke screen," she told Britain's ITV, DailyMail.com reported.

"This virus is not from nature," Yan said. "The genome sequence is like a human finger print. And based on this you can identify these things. I will [use this] evidence to tell people why this has come from the lab in China, why they are the ones who made it.

"Anyone, even if you have no biology knowledge, will be able to read it, and check and identify and verify it yourself."

Yan said the Chinese government, besides removing her information, also has started a campaign to undermine her.

"They deleted all my information and also they told people to spread rumors about me, that I'm a liar, I don't know anything, I just killed a hamster in the lab. They will try to control my family and friends and then suddenly I don't exist," she warned.

She said she was "one of the first scientists to study the coronavirus that would become known as COVID-19, and claims at the end of December 2019 she was asked by her supervisor at the university to look into an odd cluster of SARS-like cases that had erupted in mainland China."

"I was a medical doctor and Ph.D.," said Yan, "I work with a bunch of the top experts in the world, and because I had my two degrees from mainland China, I was the one assigned to do the secret investigation about new pneumonia in Wuhan."

She said she reported her concerns to her supervisor but got no response.

"I never thought this would happen when I did the secret investigation, I [thought] I would speak to my supervisor and they would do the right thing on behalf of the government," she said. "But what I saw was nobody responding to that. People are scared of the government but this was something urgent, and Chinese New Year time, [I knew] this was a dangerous virus and all these things meant I could not keep silent, there are human beings and global health [at risk]."

Chinese officials insist there's no evidence the virus was created in a lab.

A spokesman told ITV: "The fact is there is no delay or cover up  whatsoever from the Chinese government, it reported virus data and relayed information as soon as possible to the international community.

"As soon as cases were identified in Wuhan city China acted immediately to conduct investigations to stop the spread of the disease."