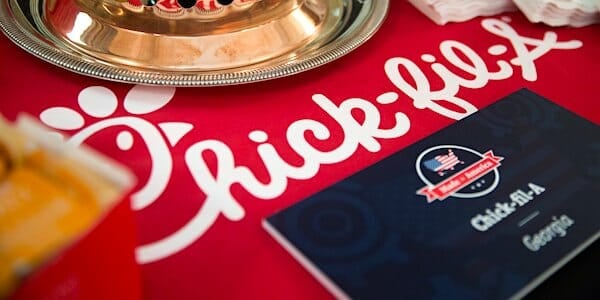 The city of San Antonio, Texas – targeted by a federal investigation for alleged religion-based discrimination against Chick-fil-A – reversed course and now will offer the popular restaurant chain a lease at its airport facilities.

The offer of a lease that is "reasonable and consistent with customary business practices" concludes an investigation by the Federal Aviation Administration.

Texas Attorney General Ken Paxton had asked for the review because of evidence that San Antonio rejected Chick-fil-A because of its owners religious beliefs.

Such discrimination is banned when airports receive federal money. The San Antonio airport received more than $8 million in grants for fiscal year 2019.

WND reported when the chain with the famed cattle urging "Eat More Chikin" became the third-largest restaurant chain in the U.S.

But outrage from the left erupted when Dan Cathy, the son of founder S. Truett Cathy, said in an interview in 2012 he supports traditional marriage.

Since then, students on college campuses have demanded that the chain be banned, and city officials in Toronto and Pittsburgh have opposed the company.

When news came of San Antonio's decision to single out Chick-fil-A, First Liberty Institute asked Secretary of Transportation Elaine Chao to investigate whether or not the city's rejection of the restaurant chain violated federal nondiscrimination law and would impact any grants.

City officials said they would refuse to allow a franchise in the airport because the company has donated to organizations such as the Fellowship of Christian Athletes, the Paul Anderson Youth Home and the Salvation Army.

Then First Liberty requested, under freedom of information laws, access to the San Antonio City Council's deliberations and comments on the issue.

In response, the city asked the Texas attorney general for permission to conceal the information First Liberty is seeking.

A letter from Edward Guzman, deputy city attorney in San Antonio, asked the state for permission "to withhold documents from disclosure."

The FAA letter to Paxton noted the resolution came through the organization's informal resolution process, in which the city agreed to take the necessary steps to offer Chick-fil-A a valid lease.

Paxton then confirmed the resolution, but city officials insisted on putting their own spin on the outcome.

The city said in a statement: "The FAA has not ordered the city of San Antonio to have Chick-Fil-A at its airport. The city itself offered to resolve the FAA investigation informally following Chick-Fil-A’s publicly stated change-of-position on its charitable giving policy. The city maintains that at no point did it discriminate against Chick-Fil-A. Any placement of Chick-Fil-A at the San Antonio Airport is ultimately contingent on Chick-Fil-A’s continued interest and approval by the city council."

First Liberty, which defended the chain, issued a statement by Keisha Russell, counsel, that said, "We are grateful to the FAA for taking our complaint against San Antonio seriously, and for ensuring that the city does not engage in anti-religious bigotry when awarding leases in its airport.

"But we are shocked that the city council is now lying to the public about the deal it reached with the FAA to allow a Chick-fil-A franchise in the airport. Despite what some of its members might think, the San Antonio City Council is not above the Constitution and federal law."

Councilman Roberto Treviño had made the motion to approve the Food, Beverage, and Retail Prime Concession Agreement with Paradies Lagardère for the airport on condition Chick-fil-A be excluded from the agreement. He claimed Chick-fil-A has a "legacy of anti-LGBTQ behavior" and that such a business has no place in the city's airport.

The harm to voters when candidates drop out, but kept on ballots

How bureaucrats are enforcing their right to 'no'