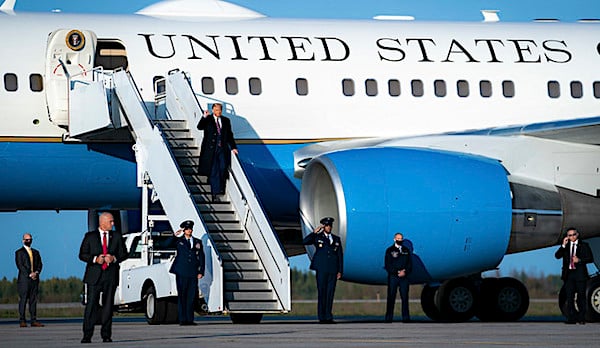 In the handover between their CNN shows Monday night, Don Lemon told Chris Cuomo the response to the Republicans' move to nominate and confirm a successor to Ruth Bader Ginsburg on the Supreme Court before the election should be drastic.

"We're going to have to blow up the entire system," Lemon told his colleague.

Cuomo interjected: "I don't see it."

Lemon continued, insisting the system established by the Founders to elect the president must be replaced "because the minority decides in this country decides who the judges are and they decide who the president is."

Cuomo pointed out it would take a constitutional amendment to get rid of the Electoral College.

"If Joe Bidens wins, they can stack the courts, and they can get that amendment passed," Lemon said.

But that would take two-thirds approval of both the House and the Senate, and three-fourths of the states, Cuomo argued.

"They may be able to do that," Lemon replied.

UNHINGED: CNN’s Don Lemon: “we’re going to have to blow up the entire system”https://t.co/RJ7tTPEyyd pic.twitter.com/gA5UftwnDy

On Tuesday, radio host Rush Limbaugh took note of Lemon's comments, saying: "Don doesn't trust that there are enough Democrat votes, is what this means. I think the Democrats are fully aware they are a minority, that they do not have a majority in terms of numbers. They are not the majority thinking. They're not the majority of people in the country. But here's a journalist, this a guy at CNN, he's an info guy, he says, 'blow up the whole system.' The Democrats are not hiding who they are, folks."

Defenders of the Electoral College point out that a pure national vote would make smaller states irrelevant, with campaigns focusing their energies on major population centers.

Heritage Foundations legal expert Hans von Spakovsky explained in a paper on the Electoral College that the Founders "struggled to satisfy each state’s demand for greater representation while attempting to balance popular sovereignty against the risk posed to the minority from majoritarian rule."

In Federalist 68, Alexander Hamilton argued that while the people should have considerable power to choose the president, it's “desirable” that “the immediate election should be made by men most capable of analyzing the qualities adapted to the station, and acting under circumstances favorable to deliberation, and to a judicious combination of all the reasons and inducements which were proper to govern their choice.”

Jarrett Stepman pointed out in the Heritage Foundation's Daily Signal that states are free to select the method in which they choose their electors.

In the early days of the republic, most states chose to have their legislatures pick electors, rather than the people.

By the time of the Civil War, every state had shifted to the popular election method.

A movement called The National Popular Vote argues the current system encourages presidential candidates to spend most of their time in "swing states" rather than campaigning for votes across the entire country.

Von Spakovsky contests that assumption, because swing states "can change from election to election, and many states that are today considered to be reliably 'blue' or 'red' in the presidential race were recently unpredictable."