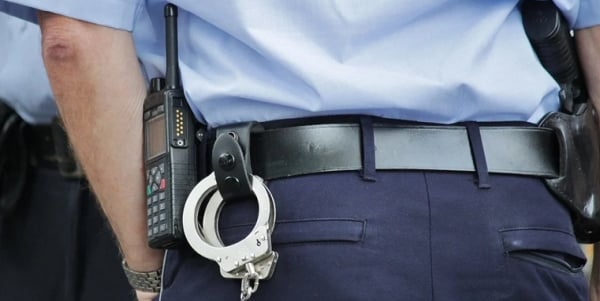 A woman sitting in bleachers among socially distanced attendees at her son's middle school football game in Ohio was put in cuffs by a police officer and hauled away for not wearing a mask.

A smartphone video capturing the incident showed the officer wrestling for several minutes with the mother, Alecia Kitts, as she resisted, insisting she could not be arrested for not wearing a mask.

Jack Windsor, an investigative reporter at local WMFD-TV, wrote on his site The Ohio Star that Kitts was arrested by an officer from the Logan Police Department because she was not wearing a mask.

Tiffany Kennedy, who videoed the incident, told Windsor that Kitts had not been warned for not wearing a mask prior to the officer approaching her.

Kennedy said Kitts was not wearing a mask because she has athsma.

A female officer seen running toward the Logan officer and Kitts at the end of the video was not wearing a mask, Kennedy pointed out. The officer pulled one out of her pocket as she was in pursuit.

“Alecia's mom said that when the officer tased her, the current went through the bleachers and zapped the kid sitting there too," Kennedy said.

Kitts appears to be socially distanced from others in the crowd and sitting with her family, Windsor observed.

Windsor reported that, according to sources, Kitts was charged with criminal trespass and released on her own recognizance.

The Marietta Times reported it was an eighth-grade football game between Marietta City Schools and Logan in Logan, Ohio.

Another attendee launched a complaint against the Logan Police Department.

Witness Skylar Steward said the police officer attempted to detain her, she resisted … she wasn't hurting anybody."

The witness identified Kitts as the mother of his son.

The cop was identified only as Officer Smith.

The athletic director, Venderlic, said Ohio Gov. Mike DeWine and the state health department "have made it very clear that masks are required indoor and outdoor at sports facilities."

MCS board member Doug Mallett said: "It escalated pretty fast into an ugly situation, he tased her pretty fast. I didn't see where she was putting anybody at risk, I guess that's a Logan rule."

The Ohio Patriot News Network tweeted that the incident was DeWine's "new normal."

"This young lady was taxed & arrested at a high school sporting event in Logan, Ohio for refusing to wear a mask. Governor, this is why you and Lt. Gov @JonHusted were booed at the Trump rally in Vandalia. We want you GONE!"