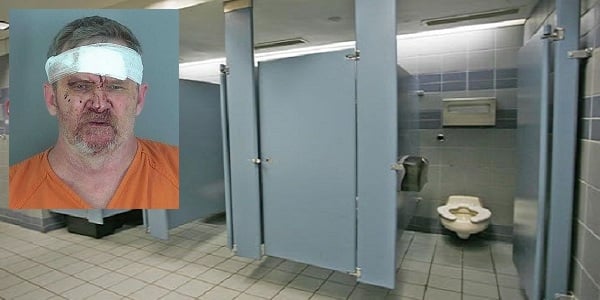 Police in Duncan, South Carolina, have filed voyeurism charges against a registered sex offender who was restrained by the father of a girl who said the man was peeping on her in a restaurant restroom.

Other fathers in the Cracker Barrel restaurant tackled and held the suspect until police arrived.

"Were you in the girl's bathroom?" one man demanded of the suspect while they awaited police. "How'd you end up there? Because Imma tell you, if that was my daughter, you wouldn't walk away," the Daily Wire reported.

Station WSPA reported Police Chief Carl Long said a 15-year-old girl said a man was looking at her while she was in the women's bathroom.

"She said she noticed something moving at her feet and realized it was a man’s head coming from the stall beside her," the report said. She went to tell her father, who then got a female employee to get the suspect out of the bathroom.

Long said the girl's father confronted Lane at the entrance to the bathroom area of the restaurant, the report said.

"The guy came running, sprinting out the front door with a very bloody nose," a witness said, according to WSPA.

Others helped tackle Lane in the parking lot and restrained him until police arrived.

Lane is scheduled for another court hearing Nov. 12.

The Daily Wire reported the suspect's phone was found on the floor of the women's restroom.