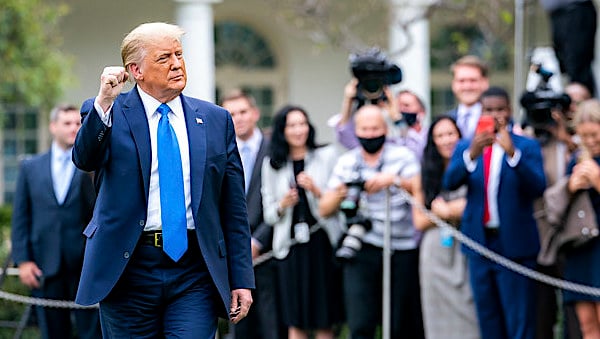 President Donald J. Trump walks across the South Lawn of the White House Thursday, Sept. 24, 2020, to board Marine One en route to Joint Base Andrews, Maryland, to begin his trip to North Carolina and Florida. (Official White House photo by Tia Dufour)

Republican South Carolina Sen. Lindsey Graham provided a slew of updates about the Senate Judiciary Committee’s investigation into Crossfire Hurricane on Sunday and teased “damning” revelations that he said will soon be made public.

“There’s a day of reckoning,” Graham said in an interview on Fox News “Sunday Morning Futures.”

On Thursday, Graham released a declassified FBI memo that said that the bureau opened a counterintelligence investigation in 2009 against the primary source for dossier Christopher Steele, a Russia analyst identified as Igor Danchenko.

The FBI investigated whether Danchenko was illegally working as a Russian agent.

Graham said that the FBI’s Crossfire Hurricane team learned about the previous investigation in December 2016 but continued relying on Steele’s dossier for its investigation into the Trump campaign.

An FBI and Justice Department team interviewed Danchenko in January 2017 regarding his work for Steele, a former British spy.

The revelation marks a major development in the investigation into the origins of the dossier, which was funded by the Clinton campaign and DNC.

Graham said Sunday that “there’s something else coming more damning than this, believe it or not.”

The South Carolina Republican hinted that additional documents related to the dossier and the FBI’s investigation will be declassified.

Maria Bartiromo, the host of “Sunday Morning Futures,” reported that her sources say that U.S. Attorney John Durham, who is investigating the origins of the Trump-Russia probe, is unlikely to issue additional indictments or a report on his investigation.

Sen. Graham: Democrats will try to destroy Barrett at their own peril https://t.co/7Y0oFrgg5p @FoxNews @SundayFutures @LindseyGrahamSC

Bartiromo, who did not identify her sources, said that there is an internal debate at the Justice Department about whether or not to release the information so close to an election.

The Justice Department did not respond to the Daily Caller News Foundation’s request for comment.

Durham has secured a guilty plea from former FBI attorney Kevin Clinesmith, who admitted to altering an email related to Carter Page in June 2017.

Graham said he had no knowledge of Durham’s plans, but added, “I’ll be shocked if nobody’s charged with a crime at the FBI…for misleading the FISA court.”

Graham said he plans to ask Comey what he knew about Danchenko, and why the FBI failed to disclose information about him to the FISA Court.

“I’m going to ask James Comey, did you know that the man who put the dossier together for Christopher Steele was a suspected Russian spy on the payroll of the Democratic Party. If you knew that why didn’t you tell the court?” Graham said.

He also said that former FBI Deputy Director Andrew McCabe will testify before the committee on Oct. 6. McCabe directed many of the decisions in Crossfire Hurricane.

Graham told Bartiromo that he is also trying to arrange an interview with William Barnett, an FBI special agent who questioned the basis for the FBI’s investigation of former national security adviser Michael Flynn.

Barnett told U.S. Attorney Jeffrey Jensen in an interview on Sept. 17 that he “did not understand the point” of the investigation of Flynn. He also said that the special counsel’s team had a “get Trump” mentality.

Ex-network host lashes out at Dem senator he once 'dated'