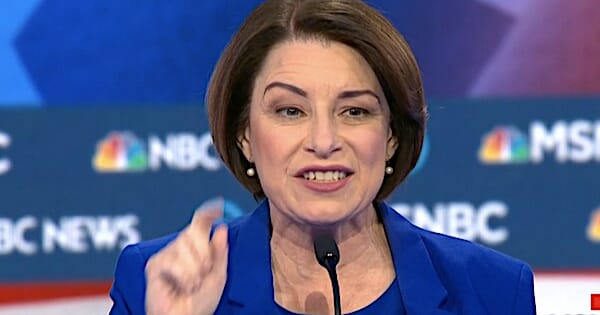 Senate Republicans already appear to have enough votes to move forward on a Supreme Court nominee, expected to be named Saturday, to fill the vacancy left by the death of Ruth Bader Ginsburg.

Late Monday, Sen. Cory Gardner, R-Colo., said he would vote, and on Tuesday, Sen. Mitt Romney, R-Utah, announced he will do the same. Sens. Susan Collins of Maine and Lisa Murkowski of Alaska are the only Republicans who  have stated they won't vote until after the election.

Now, a Democrat, Sen. Amy Klobuchar of Minnesota, inadvertently has endorsed moving ahead with the process now.

She quickly added, "People are voting RIGHT NOW to pick our president – that president should pick the next Supreme Court Justice."

People are voting RIGHT NOW to pick our president — that president should pick the next Supreme Court Justice.

But it was too late.

"YES, THAT IS HOW IT WORKS!" wrote a Twitchy blogger.

Donald Trump Jr. reacted on Twitter: "I agree and @realDonaldTrump is the President. Glad to have your support on this Amy."

Some Democratic leaders reportedly discussed with Ginsburg retiring while Barack Obama was president but she declined.

Senate minority leader Chuck Schumer has insisted that Republicans have no right to replace her. Other Democrats have threatened to pack the Supreme Court, adding seat and filling them with liberals if President Trump fills the Ginsburg seat.