"And the people were scorched by intense heat, and they cursed the name of God, who had authority over these plagues; yet they did not repent and give Him glory. And the fifth angel poured out his bowl on the throne of the beast, and its kingdom was plunged into darkness, and men began to gnaw their tongues in anguish and curse the God of heaven for their pains and sores; yet they did not repent of their deeds." [Revelation 16:9-11]

I am writing this on the morning of Yom Teruah, the Feast of Trumpets, which is called Rosh Hashanah modernly. Friday the most powerful woman in the world, the Torah-defying Jewess and ultra-leftist Supreme Court Justice Ruth Bader Ginsburg, died. My thoughts are about the culture of death she so aggressively promoted during her life – what the ancient Hebrew rabbis might call the "worship of unclean things" per the warnings of Deuteronomy and Leviticus – and the effect this idolatry has had on humanity during her highly influential life.

Thanks in significant part to the woman born Joan Ruth Bader in 1933 (the year Adolf Hitler became chancellor of Germany), wickedness spawned by open defiance of God – and the suppression of the natural law by which it might otherwise be reversed – has taken us to the brink of utter chaos.

In my Hebrew-Roots-influenced eschatology, the Feast of Trumpets is the first of the Ten Days of Awe that will end on Yom Kippur, the Day of Atonement. In Hebrew theology, these 10 days, the final 10 of 40 days of repentance, is the period when God decides one's fate: the Book of Life or the Lake of Fire. The Resurrection and Rapture will occur on a Feast of Trumpet as described in 1 Corinthians 15:51-52 ("Listen, I tell you a mystery: We will not all sleep, but we will all be changed – in an instant, in the twinkling of an eye, at the last trumpet. For the trumpet will sound, the dead will be raised imperishable, and we will be changed") and 1 Thessalonians 4:16-17 ("For the Lord Himself will descend from heaven with a loud command, with the voice of an archangel, and with the trumpet of God, and the dead in Christ will be the first to rise. After that, we who are alive and remain will be caught up together with them in the clouds to meet the Lord in the air.")

On the Day of Atonement, the King of Kings, attended by his Host of Heaven, including the glorified bride-become-wife of God, returns to crush the wicked and save the Hebrews (and the mixed-multitude per Exodus 12:38) in the final event of the 10 days, the Winepress of God's Wrath (which prophecy inspired our "Battle Hymn of the Republic" during the Civil War), a final iteration of the pattern established in Exodus, complete with a splitting of the Mount of Olives by Jesus, paralleling the dividing of the waters by Moses (Zechariah 14:1-5).

While the instantaneously Glorified Bride of Christ ascends into the spiritual realm to celebrate the Wedding Feast of the Lamb and receive their assignments for the Millennial Kingdom, the rest of humanity endure Ten Days of Wrath as the Bowl Judgments are poured out upon the earth. These people who are "left behind" include the wicked, the deceived-unsaved, and the 144,000 Hebrews of the Twelve Tribes (sealed against death per Revelation 7:1-8). Their time of wrath is not seven years but 10 days (Revelation 2:10), the last 10 days of the seven year Shemitah during which the tribulation occurs (the time of testing named for the Roman wheat-threshing sledge, the tribulum, by which wheat and chaff are separated before the wheat is taken into the barn and the chaff is burned [Matthew 3:12])

Jesus specifically taught this chronology in Matthew 24-25, which I explain in detail in Parts 2 and 3 of my book "The Prodigal Son Prophecy."

Once I firmly grasped this teaching, the Olivet Discourse, I aligned the book of Revelation to it and made some astonishing discoveries. Perhaps the most profound was a new perspective on the letters to the seven churches, which inspired Chapter 3: The Letters to the Left-Behind.

In it I show how the seven messages in Revelation 2-3 have a dual audience, the righteous and not-quite righteous (the deceived-unsaved) and that the overarching lesson is that those left behind (in outer darkness where there is wailing and gnashing of teeth) have a final chance during these 10 days to repent and be spared the Lake of Fire. Most will die during this time, but if they "endure to the end" their rewards will be secured at the second resurrection at the close of the Millennial Kingdom (Revelation 20). Some will survive and be a part of the mixed multitude saved by Jesus on the Day of Atonement, repopulating the earth along with the Hebrews during that thousand year Sabbath "day" when the earth will be regenerated like the Garden of Eden while Satan and the wicked remain locked in chains.

The Letters to the Left Behind is the subject of Part 6 of my serial release of "The Prodigal Son Prophecy" in PDF and video form. If you are not already on my email list, ask for this offer by name via email to [email protected] for a free copy.

How close are we to the Ten Days of Awe/Wrath? One measure is the desperation of the damned. The devil knows his time is short, and he is desperate, as are his followers in this world. For them, our president is "the last Trump," and if he succeeds in holding the presidency – surviving the full fury of their combined wrath and the total depletion of their political arsenal – their oh-so-close-to-fulfillment vision of global Socialist Utopia will be shattered.

Today their heroine "RBG" is dead, and Trump has the power and the will to replace her with a constitutionalist. To quote Shakespeare's Julius Caesar, " Fierce civil war will paralyze all of [America]. … People's capacity for sympathy will grow tired and weak from the sheer quantity of cruel deeds. And Caesar's ghost, searching for revenge with the goddess Atë by his side, just up from Hell, will cry in the voice of a king, 'Havoc!' and unleash the dogs of war."

What defines the wicked and makes them so desperate is not the evil of their deeds, but their refusal to repent. If God could forgive David and Solomon, God could forgive RBG and her baby-slaughtering, sodomy-championing allies – if they would only repent. But some would rather gnaw their own tongues in agony than submit to God. I hope that Joan Bader repented and is spared the torment Jesus took upon Himself on her behalf – just as I want that for every sinner, and for all those who will be "left behind" with a 10-day "second chance" at the Lord's soon return. 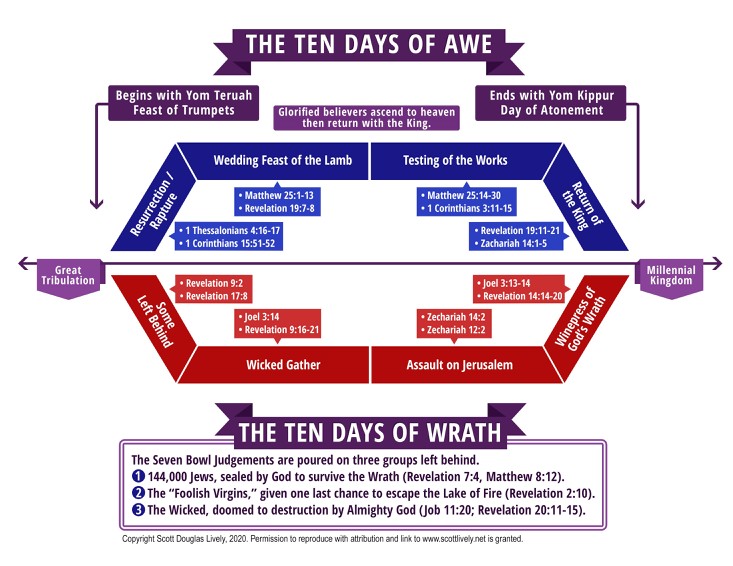