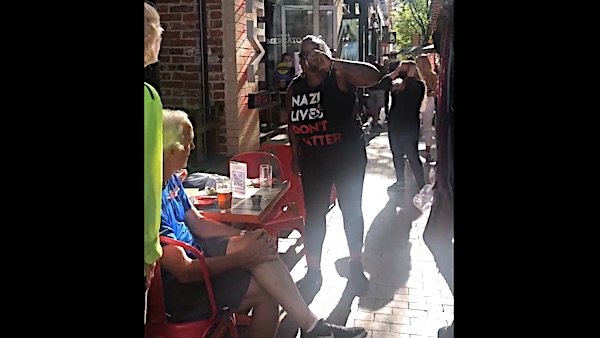 A protester, who was caught on video yelling expletives at outdoor diners this weekend in Pittsburgh, told a local news outlet his movement does not target businesses.

“We don’t target businesses,” the protester who was identified as Lorenzo Rulli said, according to The Pittsburgh Post-Gazette on Tuesday. “Our restaurant industry in the city supports us very much. We were talking to people that were talking to us.”

Rulli yelled “f*** 12” and “f*** the white people that built the system set against mine, you old d*ck,” video showed. He also can be seen holding up his middle finger at two elderly patrons.

Rulli said restaurant-goers cheered the protests on, according to the Post-Gazette, but video showed two women fleeing the outdoor seating area. Rulli also said that he responded to the older gentleman with expletives only because the patron called Rulli an “embarrassment” and “disgusting,” the Post-Gazette reported.

Another protester named Nique Craft, who identifies as neither male nor female, drank a beer off the same elderly couple’s table while other protesters laughed, according to the Post-Gazette. Craft wore a shirt in the video that said “Nazi Lives Don’t Matter.”

Craft said she drank the beer after the elderly woman offered to have a conversation with her.

“So, being a theatrical, snarky type of person that I am, I said that I don’t have time to wait for you to order another beer; I will take the one you have,” Craft told the Post-Gazette.

“Even though people saw that whole thing, they still saw me as an aggressor,” Craft continued, according to the local outlet. The demonstrator said the elderly man criticized a different protester for pulling Craft’s hair and discouraging Craft from engaging with the patrons.

The city’s police department is investigating the incident and enlisting help from the FBI and the U.S. Attorney’s Office, the Post-Gazette reported.