By David A. Burton

On Aug. 4, WND reported that Stanford radiologist Scott Atlas says stopping COVID-19 infections is "not the appropriate goal." He could not be more wrong.

For more than a century it has been understood by public health experts that to stop an epidemic you must prevent people from getting the disease. It astonishes me that Dr. Atlas apparently doesn't know that.

In principle, the process to stop an epidemic is simple: Identify everyone infected and quarantine them. It can be challenging to implement, but that's how every country that has successfully curbed their COVID-19 epidemic, without horrific human and economic cost, has accomplished it.

South Korea was one of the first countries hit by COVID-19, after China. But the Koreans employed rapid testing, and immediate contact-tracing, to quickly find and quarantine nearly everyone with the disease, before it could spread. That strategy got the epidemic in South Korea largely under control in less than four weeks: 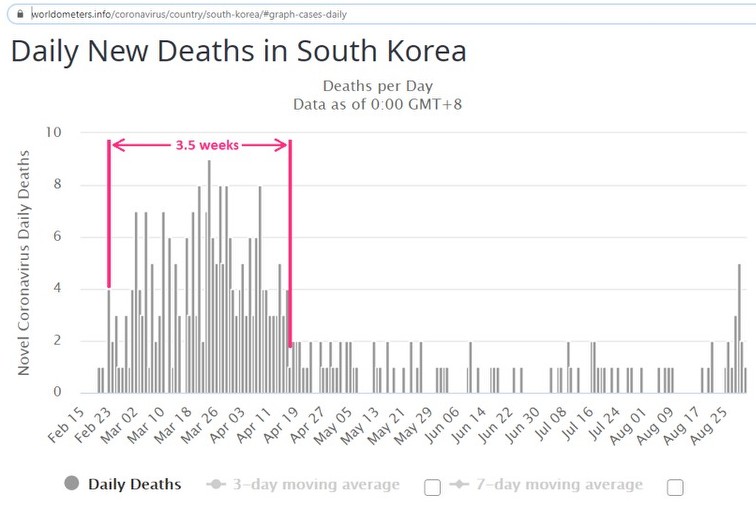 The number of COVID-19 deaths per million population is 90 times higher in America than South Korea. If America had done what South Korea did, to prevent most citizens from getting the disease, then more than 185,000 Americans would still be alive. That figure reflects the difference in per-million COVID-19 fatality rates, between the two countries.

That's just part of the cost of failing to protect Americans from infection. Many COVID-19 survivors suffer lasting (perhaps permanent) health problems, such as lung scarring (pulmonary fibrosis), brain or heart damage and many other issues. A recent study found lasting neurological problems in 55% of COVID-19 survivors.

To stop the epidemic we must quickly test everyone suspected of the disease, or at risk of having had recent contact with someone with the disease, and quarantine those who test positive, until they're no longer contagious.

We must also immediately identify and notify their likely contacts, so that they, too, can be tested.

Contact-tracing is necessary even for patients who are mostly recovered and perhaps no longer contagious, because it's essential to find those they infected before recovering.

The epidemic is out of control in America because we're not doing that. One of the reasons is that people like Dr. Atlas are dispensing extraordinarily bad advice.

Atlas has been accused of seeking "herd immunity," which he denies. That's good, because achieving herd immunity without a vaccine would kill millions of Americans.

"Herd immunity" to a disease occurs when a very high percentage of the population are immune, so that most people who have the disease are unlikely to come in contact with anyone who lacks immunity. It's unknown whether herd immunity is possible for COVID-19, because we don't know how long acquired immunity lasts.

With a safe and effective vaccine, herd immunity to a disease can be achieved by vaccination, without infecting people. But there's still no vaccine for COVID-19.

Without a vaccine, to reach herd immunity, if it's even possible, would require about 300 million COVID-19 cases in the United States. That's 48 times the 6.2 million known cases so far – which have already killed 188,000 Americans.

Even if half of America's COVID-19 cases have gone undetected, and even if we optimistically assume medical advances will reduce the fatality rate by half, reaching herd immunity without a vaccine would still kill 12 times as many Americans as have already died from the disease, i.e., more than 2 million.

Dr. Atlas does not advocate that, but his approach is similar. He opposes the testing, contact-tracing and quarantine of infectious people, which are needed to stop the epidemic. If we follow his advice, hundreds of Americans will continue to die unnecessarily, every day, and we won't be able to end the ruinous lockdowns and business closures until a vaccine is developed and deployed, which is many months away, at best.

Unfortunately, his approach is more or less what we're already doing, because of the incompetence of the government response. That's not a partisan judgment: Both Democrat-run and Republican-run states have severely bungled their responses to the epidemic.

Inexpensive COVID-19 tests are now widely available, which can provide test results in just 15 minutes. But, in the United States, patients typically wait days for their test results, mostly because of state government bureaucratic delays.

It needs to be impressed upon our state (and federal) officials that every delay in testing someone who might be infected, in telling them the results, in finding their recent contacts and in notifying those contacts, has the potential to kill people.

Time is critical. If someone gets a positive test result in the morning, then most of his contacts should be tested and be told their test results that same afternoon.

Here in North Carolina, I know of a case in which a plumber felt ill and got a COVID-19 test. But he wasn't notified of his positive test result for a full week, and during that week he continued to work. He infected over a dozen households. Each of those secondary infections was completely unnecessary.

It would not have happened in the countries that stopped the disease.

The way they do it is to immediately test everyone suspected of infection or exposure to the disease. Then tell patients the results quickly: in minutes or hours, not days. Then, whenever authorities find someone who tested positive, he's immediately interviewed to find his recent contacts. Then everyone he might have had contact with is immediately notified and told to self-isolate and get a free test. The process of rapid testing and contact-tracing is then repeated for his recent contacts.

That's how South Korea largely stopped its epidemic, in less than a month, without closing down the nation's economy.