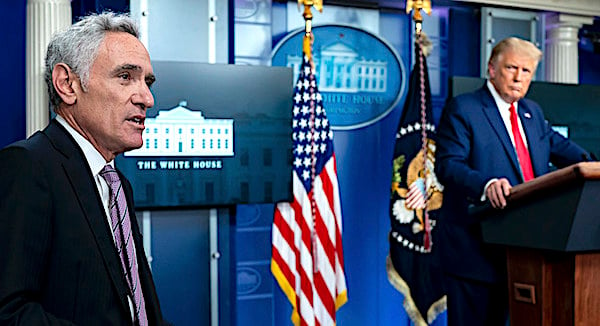 Atlas had a chance to respond in an interview Monday night with Fox News' Laura Ingraham.

He said "it's all about delegitimizing the president and feeding into a false narrative that the president doesn't listen to the science or the scientists."

"I was called in because I can translate the medical science into public policy," Atlas said. "I advise the president to do everything he can to protect the vulnerable, to open schools and open society and to make sure hospitals are not overcrowded.

"Of course, this is the right policy," he said. "It may not be the policy that everyone agrees with, but it happens to be the exactly the policy in concert with many of the world's leading epidemiologists and infectious disease people."

The president listens to a lot of people, Atlas told Ingraham, and "he understands in a very common-sense way what the science shows and what should be done save American lives."

Atlas said he didn't take the job "to make friends."

"I mean there are people who say what I've said, which is vulnerable people protection and save lives by also opening up society safely," he said.

"You're not going to hear me say that," said Atlas, "but the president has a choice of experts to listen to."