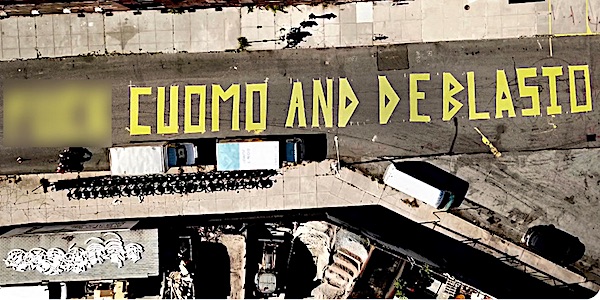 A street mural reading “F**k Cuomo and De Blasio” was painted on a street in Brooklyn over the weekend, according to the New York Post.

The statement about the two Democrats, New York Gov. Andrew Cuomo and New York City Mayor Bill de Blasio, was marked in bold yellow letters early Saturday morning and spanned the length of a block, according to the Post. The city removed the mural at around 10 p.m. the same day.

The painting was reportedly painted around the end of a block party in the area which was also dubbed a “small business owner protest,” attendees told the Post.

“It was a big hit. The crowds cheered, even the cops chuckled,” an unidentified attendee told the outlet.

The statement resembled a Black Lives Matter mural painted adjacent to Trump Tower commissioned by de Blasio in July, according to the Post.