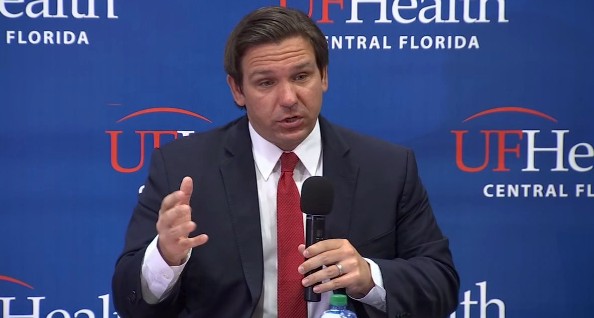 Amid panic over a rise in coronavirus cases that corresponds with an increase in testing, Florida Republican Gov. Ron DeSantis held a virtual roundtable discussion Thursday with a professor from Harvard and two from Stanford who contend lockdowns only make the pandemic worse.

Dr. Martin Kulldorff, a medical professor at Harvard University, condemned the lockdown of the healthy, arguing for an "age-targeted strategy."

He insisted universities can hold in-person classes "almost normally" with very little risk, and there's no need for testing on campus.

"What helps the elderly is if the young take this very minimal risk and live normal life until there is herd immunity, and then when we have herd immunity, the older people can also live more normal lives," he said.

Kulldorff has argued that schools could reopen without enforcing mask-wearing, pointing out that in Sweden they remained open during the pandemic without masks.

Bhattacharya, who took part in an antibody study that concluded the number of COVID-19 infections is significantly higher than the estimates, said another lockdown in Florida "would be disastrous."

"At this point, we know that the benefits of a lockdown are small," he said.

"All they do is push cases off into the future; it doesn't actually prevent the disease from happening. And the costs are absolutely catastrophic, enormous," Bhattacharya said.

In fact, the White House and state and local governments back in March and April emphasized a strategy of "flattening the curve" or "slowing the spread." That was assumed to mean spreading out the cases over time -- not reducing them -- so that the health care system would not be overwhelmed.

DeSantis asked the professors whether they think COVID-19 "represents a significant threat in terms of overwhelming hospitals in the United States."

All three said no.

"We're in the minority worldwide. People are still locking down and engaging in behavior which is likely to be detrimental in the long run," said Levitt, a recipient of the 2013 Nobel Prize in chemistry.

They insisted it was a public relations roundtable, not a discussion of public health.

"No one is advocating for a full-scale lockdown in Florida," Gibson said in a statement. "But we have been and continue to ask for common sense prevention measures such as face masks which are essential to preventing further spread. Without that, the virus remains a threat, the elderly will remain in isolation, and those who do contract the disease will live with the ongoing uncertainty of possible long-term health damages scientists are only now beginning to document."