The Rev. Franklin Graham plans to lead a prayer march in Washington, D.C., on Sept. 26, saying the only hope for the United States is God.

Asked what prompted him to call for this event, Graham told The Western Journal, "I think the chaos we see in our country. The anarchy that we see in our streets."

"The coronavirus has put fear in people's hearts, anxiety," he continued. "And we've seen the injustices that have taken place on some of our city streets. And all of this is just boiling over.

Though the evangelical leader is a supporter of President Donald Trump, he doesn't believe any one politician is going to turn the U.S. around.

"I think God can use a politician to turn this country around, but we have to have God," Graham said.

Our country is in trouble & our only hope is in God. I’m holding Prayer March 2020 in Washington D.C. on Sept. 26 beginning at noon. We’re going to go from the Lincoln Memorial to the Capitol, praying for our nation. No music, no speakers—just prayer! I hope 1000s will join me. pic.twitter.com/hjUFcp8NT0

The Christian argued the efforts of politicians and educators to keep God out of the nation's affairs and mock people of faith have contributed to the current state of affairs.

"It's not getting better; if anything it's worse than it's ever been. And the only hope I see for this country is God," Graham said.

He explained that Prayer March 2020 will not be marked by glitz and worship bands but will be focused on prayer.

People will gather at the Lincoln Memorial, where the two-hour event will kick off at noon Eastern Time, with prayer focused on asking repentance "and asking God to forgive our sins and heal our land," drawing from the famous words found in the Bible passage 2 Chronicles 7:14. 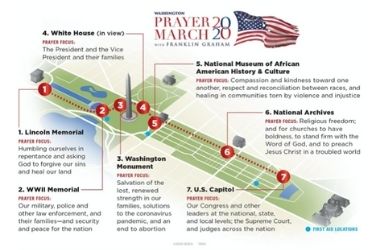 Five stops will follow during the 1.8-mile walk to the U.S. Capitol, including the World War II Memorial, the Washington Monument, the White House, the National Museum of African American History and the National Archives (where the Constitution and Declaration of Independence are housed).

Each location will have a different prayer focus.

For example, at the World War II Memorial, people will pray for those in the military, police and other law enforcement, as well as for the security and peace of the nation.

Some leading in those appeals will be Graham's son, Col. Edward Graham, a West Point graduate who served 16 years in Special Operations in the U.S. Army.

Retired Lt. Col. Oliver North, the former president of the National Rifle Association and a Vietnam War veteran, is also slated to pray at the World War II Memorial.

At the National Museum of African American History and Culture, the petitions to heaven will center on racial reconciliation and the healing of communities that have experienced violence and injustice.

Alveda King, the niece of Dr. Martin Luther King Jr., and Bishop Harry Jackson, senior pastor of Hope Christian Church in Beltsville, Maryland, will be among those offering prayers.

Prayer at the Capitol will focus on Congress, the Supreme Court and those who serve in state and local governments.

"The Bible tells us to pray for those that are in authority. It commands us to do that," Graham noted.

The preacher says the prayer marchers will be praying for Trump, whom he gives high marks in his handling of the office to date.

"I think he's probably the best president we've had in my lifetime," Graham said.

"He's had incredible mountains that he's had to climb, constantly attacked by his enemies, but yet he's been able to accomplish a peace agreement, which is incredible."

Graham also pointed to Trump's handling of the economy and how he has navigated through the coronavirus pandemic as many voices argued over the best course to take.

Trump has also kept his word to evangelicals, according to Graham.

"He's the most friendly president in the history of our country to people of faith," Graham said. "And it's all people. He respects people who have faith."

"And he's been very supportive of evangelicals," the minister added. "He likes having evangelicals and people of faith around him in the White House. And he wants their input. And we've never had that before like that in my lifetime."

"I've never known a president that has been this open with evangelicals."

For those who cannot attend Prayer March 2020, the event will be livestreamed.

Randy DeSoto, The Western Journal
State Dept. reveals how many Afghan refugees are headed to each state in U.S.
Pelosi dares to call Biden 'perfect' on foreign policy as Americans are still stuck in Afghanistan
Video: Biden accidentally admits life for Americans under him is horrible
France furious after Biden's foreign policy 'stab in the back'
Hospital says to 'prove' their faith, religious workers can't ingest common medicines
See more...