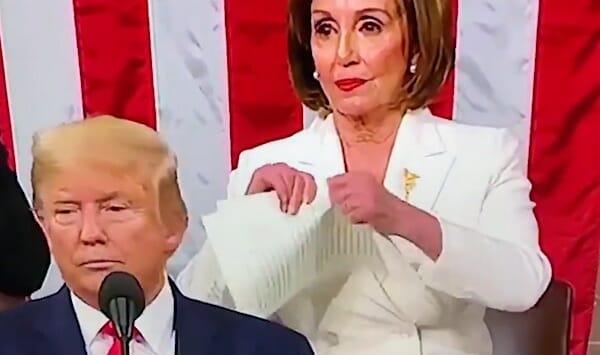 If so, they argue, the law "requires removal from office."

Pelosi made it clear what she thinks of the president as she tore up his State of the Union address on national TV at the conclusion of his remarks in February.

When asked afterward to explain her actions, Pelosi responded, "Because it was the courteous thing to do, considering the alternatives."

"What we saw today was the manifestation of hatred," said Sen. Ted Cruz, R-Texas, at the time. "That hatred consumes any other sentiment they may have."

The Republican lawmakers noted to Barr that the federal law in question reads in part: "Whoever willfully and unlawfully conceals, removes, mutilates, obliterates, or destroys, or attempts to do so, or, with intent … any … document, or other thing, filed or deposited with any clerk or officer of any court of the United States, or in any public office, or with any judicial or public officer of the United States, shall be fined under this title or imprisoned not more than three years, or both."

It also states that someone who destroys "such record" "shall forfeit his office and be disqualified from holding any office under the United States."

The request comes as Pelosi is being slammed for getting her hair done at a California hair salon that has been closed due to coronavirus restrictions.

Palmer said in a statement that Pelosi’s "famous tantrum on the House floor was more than disgraceful; she violated her responsibility to preserve official documents delivered to the House of Representatives."

"We ask the attorney general to review this scandalous outburst, not simply because it offended every American, but because it set a precedent for radical politicians to hijack state events for partisan performance art and possibly break the law with, thus far, no consequence," he said.

The possibility that Pelosi broke the law was raised back in February, but the lawmakers say they want the issue resolved.

"Fact-checkers" have argued a copy of the speech isn't an official record.

At the time, Fox News host Sean Hannity called it "one of the most classless things ever to be done in the history of the State of the Union."

Throughout the address, Pelosi was restless, not paying attention and scanning the room, even raising her hand to make gestures to fellow Democrats.