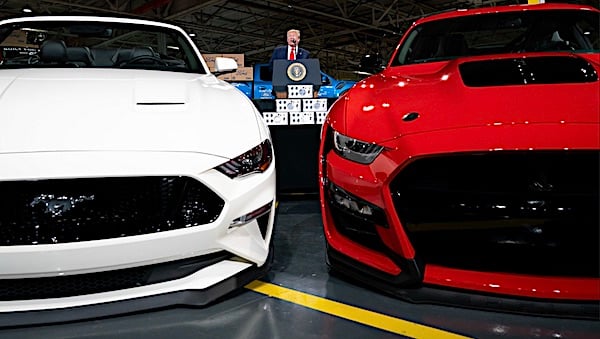 California Democratic Gov. Gavin Newsom has signed an executive order requiring "100%" of in-state sales of new passenger cars and trucks be zero-emission by 2035.

He's conceded that he won't be taking away from residents existing gas-powered cars and trucks, and will even allow them to be resold.

But within 15 years, no new cars will have a gas engine, he announced.

iHeart Media reported Newsom has claimed for months that the large wildfires in the state this year are the result of climate change and has said he was sworn into office to take aggressive action.

"This is the most impactful step our state can take to fight climate change," he said. "For too many decades, we have allowed cars to pollute the air that our children and families breathe. Californians shouldn't have to worry if our cars are giving our kids asthma. Our cars shouldn't make wildfires worse – and create more days filled with smoky air. Cars shouldn't melt glaciers or raise sea levels threatening our cherished beaches and coastlines."

Many experts, however, have pinned the blame on bad forest management, and even Newsom has acknowledged that it's at least part of the problem.

The Washington Examiner reported Newsom also is trying to boost his state's economy, which includes many manufacturers of electric vehicles and their components.

Newsom praised Ford specifically for its production of electric vehicles.

But he criticized several other automakers, including Fiat Chrysler, General Motors and Toyota, who are siding with the Trump administration in fighting California's tailpipe exhaust standards.

The report said the California Air Resources Board will create a new set of government rules that require new passenger car and truck sales to have zero emissions by 2035.

Under Newsom's plan, the state also will develop "A Zero-Emissions Vehicle Market Development Strategy" by 2021.

Newsom said: "To support the transition away from fossil fuels consistent with the goals established in this order and California's goal to achieve carbon neutrality by no later than 2045, the California Environmental Protection Agency and the California Natural Resources Agency, in consultation with other states, local and federal agencies, shall expedite regulatory processes to repurpose and transition upstream and downstream oil production facilities, while supporting community participation, labor standards, and protection of public health, safety and the environment."