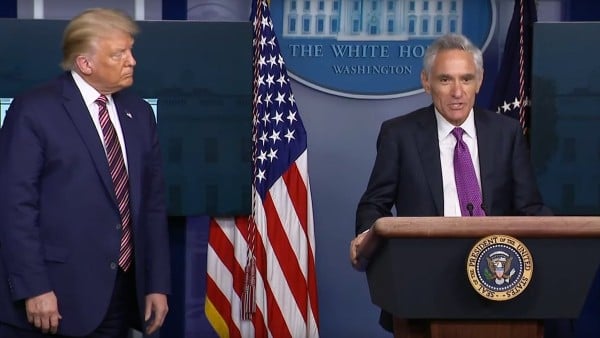 A Harvard Medical School professor has come to the defense of Dr. Scott Atlas against 98 Stanford colleagues who accused the White House coronavirus adviser of making false statements about the COVID-19 pandemic.

Harvard's Martin Kulldorff, in a letter Wednesday to the editor of the Stanford Daily, was responding to an open letter by the Stanford faculty members claiming that "many of [Atlas'] opinions and statements run counter to established science."

But Kulldorff pointed out "the alleged falsehoods are not mentioned" in the open letter, "making scientific discourse difficult."

"Among other things, the letter advocates handwashing, which Atlas obviously agrees with. So, what are the disagreements?" he wrote.

Kulldorff contended that while "anyone can get infected, there is a thousand-fold difference in mortality risk between the old and young, and the risk to children is less than from annual influenza."

"Since COVID-19 operates in a highly age-specific manner, mandated counter measures must also be age specific," Kulldorff wrote at the time. "If not, lives will be unnecessarily lost."

Atlas, a senior fellow at Stanford's Hoover Institution, was a professor and the chief of neuroradiology at Stanford University Medical Center.

He said he would be "delighted" to debate the age-targeted strategy with any of the 98 signatories.

Kulldorff said advocates of the strategy include professor Sunetra Gupta at Oxford University, describing her as "the world's preeminent infectious disease epidemiologist."

"Assuming no bias against women scientists of color, I urge Stanford faculty and students to read her thoughts, he wrote.

Kulldorff provided a link to an interview with Gupta.

WND reported this week YouTube has censored a video of an interview by the Hoover Institution with Atlas. The Google-owned video platform said the content "contradicts the World Health Organization or local health authorities' medical information about COVID-19."

The interview can still be viewed on the Hoover Institution website along with a transcript.