Americans are facing an imminent presidential election more crucial to their freedom and wellbeing than perhaps any election in their nation’s history – and yet which has become a total charade, a farce, a massive pretense.

Virtually the entire “mainstream media” loathes the energetic and fearless incumbent Donald Trump, who resurrected the U.S. economy, made America energy-independent, destroyed the ISIS caliphate and largely kept his campaign promises, all while fighting off a never-ending coup against him. The same media fiercely supports – and actually pretends to venerate – the challenger Joe Biden, a feeble, constantly lying, unprincipled, corrupt career politician whose mental disintegration is now so apparent and advanced that he can barely speak coherently.

They all recognize, of course, that Biden is simply a smiling and soon-to-be-discarded Trojan horse, inside which impatiently wait the radicals, socialists and Marxist revolutionaries who plan to burst out and rule America should the Biden ticket prevail.

And what would happen then?

The astonishing truth is laid out in the powerfully eye-opening September issue of WND’s monthly Whistleblower magazine, titled “INSIDE THE TROJAN HORSE: What America will become if Joe Biden is elected president.”

(Important note: Due to circumstances beyond our control, we had to skip the August issue of Whistleblower. However, please rest assured that all subscribers will still receive a FULL 12 ISSUES in their subscription. So, nothing to worry about. Thank you for your patience and understanding!) 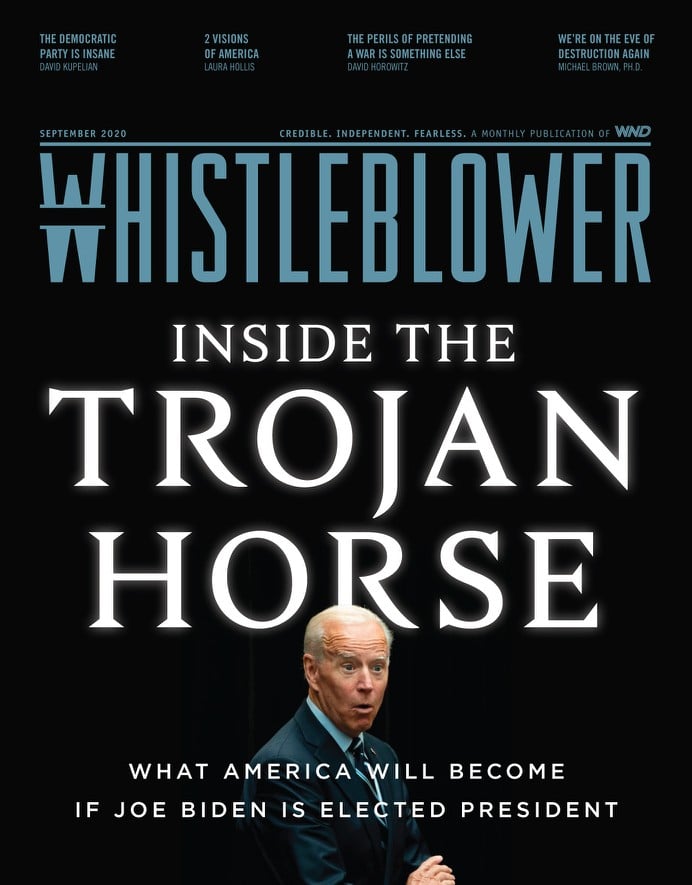 “Democrats demonize and ‘defund’ the police that protect them and then complain when crime skyrockets; they encourage violent communist-anarchist mobs to burn down our cities; they insist they can change the earth’s weather by adopting a bizarre totalitarian-socialist program that would destroy our economy and annihilate individual rights; they believe convicted terrorists should be allowed to vote from prison; they believe a beautiful, full-term human baby about to be born can be slaughtered at will; they agree there are dozens of different genders – and that men can get pregnant. That’s insane.”

Bottom line, explains Kupelian: “Today’s Democratic Party has become possessed by the dark revolutionary spirit of Marxism, which in reality is based on hatred and rebellion against God, against His commandments, against His morality, against the very idea of objective truth. Marxists want their own truth, their own laws, their own morality, their own biology, their own science, their own heaven … on earth. They want nothing to do with the Judeo-Christian values that have long served as the moral foundation of America – which they openly hate.

"And yet, these are the very people who believe they’re much more intelligent and moral than you, and who, in just a few weeks, fully intend to take over America forever.”

Rush Limbaugh puts it starkly: "If the Democrats win, that's the end of democracy. It's the end of the two-party system. We're going to have a one-party government that is going to devote itself to eliminating all opposition. That's what's at stake. If they win, I think the Republican Party essentially ceases to exist."

How is that even possible, seeing as America has been a two-party system for centuries?

"One of the first things they will do,” explains Limbaugh, “is grant statehood to D.C. and Puerto Rico, and that will give them four Democrat senators. They will never lose control of the Senate. They will never lose control of the House. They will pack the Supreme Court with who knows how many new justices, and they'll all be left-leaning justices. And it won't take them long to do any of this. And after they've done it, there will be a one-party state. The United States will be a one-party government."

In this issue of Whistleblower, some of today’s brightest minds, from Dennis Prager to Rush Limbaugh to Ben Shapiro to David Horowitz, describe exactly what will happen to America if the Democrats prevail in November – as well as what is required to stop them.

Highlights of “INSIDE THE TROJAN HORSE” include:

President Donald Trump himself recently sized up the current war over America’s future this way:

“At stake in this election is the survival of our nation. It’s true, because we’re dealing with crazy people on the other side. They’ve gone totally stone-cold crazy. If you want a vision of your life under a Biden presidency, think of the smoldering ruins in Minneapolis, the violent anarchy of Portland, the bloodstained sidewalks of Chicago, and imagine the mayhem coming to your town and every single town in America.

“They’re coming to get you. ... and me. We, we’re the wall between the American Dream and total insanity, and the destruction of the greatest country in the history of the world.”

September’s profoundly eye-opening issue of Whistleblower explains not only “What America will become if Joe Biden is elected president,” but also, says Kupelian, “how good people – and America is still blessed with millions of them – can stop the Trojan horse before it’s too late.”

You’ll get the acclaimed hardcover book on the Trump Revolution, "American Greatness: How Conservatism, Inc. Missed the 2016 Election and What the D.C. Establishment Needs to Learn" by Chris Buskirk and Seth Leibsohn.

How is it possible that not just Washington insiders and the “mainstream media,” but also the conservative elite, were all so completely out of touch with reality during the 2016 presidential election cycle? Today, a few weeks before the 2020 election, little has changed.

“We were all wrong!" "The greatest political upset in our lifetime." "None of us saw this coming." Those are just a few of the confessions pundits, experts and anchors expressed when it emerged that Donald J. Trump was the winner in 2016. Yet, while most of the political establishment and pundits missed the boat, there were many who recognized the growing Trump phenomenon in early spring 2016. And there were some who recognized, even during every seeming Trump-created "meltdown" or "mistake," that Donald Trump not only could win, but would win.

What did they see that others didn't? More importantly, how could so many "experts" and "smart people" get the election so totally wrong? And why are they still considered experts to this day?

"American Greatness" is an analysis and indictment of the mainstream media, liberal commentariat and conservative establishment that implicitly undermined, if not insulted, over 60 million fellow Americans when they treated Donald Trump's candidacy as a sideshow. With so little humility or self-reflection – and still no apology! – how can these so-called experts continue reporting on and analyzing a country and polity they have essentially admitted they do not understand? After all, what they got wrong in 2016 was not just an election. What they got wrong was America.

"American Greatness" is not just another analysis of the mainstream media’s liberal biases. It focuses equally on the many conservative writers, thinkers and pundits who have profoundly missed the mark as well. "American Greatness" explains how the timing was perfect for a populist takeover, why both the Left and the Right missed the pulse of the nation, and, most important, how we can move forward to truly make America great again.

If you prefer, you may order a single copy of the September 2020 issue, " INSIDE THE TROJAN HORSE." Or GET THE DIGITAL VERSION HERE!