With the recent passing of our U.S. Supreme Court Justice Ruth Bader Ginsburg, my wife, Gena, and I express our deepest condolences to her family, colleagues and friends. The country has lost a great champion and patriot for women's rights, and she will be deeply missed.

This is one of those stories about which one says, "You just can't make this stuff up." Let me explain.

Tuesday (Sept. 22) will be the 158th anniversary of Abraham Lincoln's signing of the Emancipation Proclamation (EP). On that day in 1862, President Lincoln issued a preliminary declaration (EP) that as of Jan. 1, 1863, all enslaved people in the states currently engaged in rebellion against the Union "shall be then, thenceforward, and forever free."

As history.com explained, "Lincoln didn't actually free any of the approximately 4 million men, women and children held in slavery in the United States when he signed the formal Emancipation Proclamation the following January. The document applied only to enslaved people in the Confederacy, and not to those in the border states that remained loyal to the Union."

The EP also redefined or recast the goal of the Civil War, at least for the North, from being one that sought to preserve the Union to one focused upon the fight to end slavery.

Well, I was going to write on the fight and history to end slavery when I came across an amazing story (or stories) about one (or some) who claimed to have saved Abraham Lincoln from drowning when he was an adolescent. Have you heard about these?

In short, Gollaher (1805-1898) was a childhood friend of Abraham Lincoln. He and Abe were apparently such good friends, according to Explore Kentucky History, that: "President Lincoln is supposed to have expressed his desire to see Gollaher to Dr. Jesse Rodman of Hodgenville. Gollaher himself is supposed to have referred to this meeting, adding that Lincoln had offered to pay his way to Washington, D.C., but that he did not go because of his fear of trains."

Gollaher claimed in his latter years (after the president was assassinated) to have saved Abe's life when they were boys. Their families lived close to each other in Kentucky, and the boys would often fish and play around Knob Creek.

By Austin's testimony, as reported in the Independence Daily Reporter (1898), young Abe had slipped on a log they were using to cross and plunged headlong into the creek, flooded from recent rains. Because he couldn't swim and was drowning, Austin threw Abe a nearby fence rail or plank, which he used to stay afloat down river until he could grab some shoreline branches. (If you're interested to read other versions and accounts, including excerpts from later newspapers and other resources, check out the online Lincoln Financial Foundation Collection's Knob Creek Drowning Incident file.)

Did Gollaher, in fact, rescue the young Abraham Lincoln from the flood waters of Knob Creek?

Again, according to Explore Kentucky History, "Clearly we cannot know for sure. Lincoln never mentions being rescued by Gollaher, who is himself the only source for this claim. Most scholars are skeptical, noting that Gollaher's memory seems to have become more precise the older he grew."

"It is, however, certainly believable that President Lincoln would, as Dr. Rodman recalled, wish to reminisce in the nostalgic presence of a childhood friend. And as for the rescue, who can say for sure? And even if he did not save the future president, he clearly occupied a unique place in Lincoln's fond memories of his Kentucky childhood."

But the mystery of Abe's stream savior doesn't stop there.

The Online Archive of California documents how Dr. John W. Winkley, a Methodist minister, "had a popular column in the Oakland Tribune newspaper in the 1940s, 1950s and 1960s. The column was titled 'The Knave' and included stories of Winkley's travels throughout the west and Midwest. The letters and manuscripts in the collection are from Winkley's time as a board member and newsletter editor for the Contra Costa County Historical Society. Born in Indiana in the 1880s, Winkley graduated from Boston University in 1908, became a Methodist minister and settled in Auburn, California, before moving to Contra Costa County. He lived into his 80s."

On Sun., Feb. 12, 1967, The Knave column was titled, "Untold Tale: Lincoln Rescue Unfolds from Antioch Grave." In it, one "Mary Head Berry Mitchell," who is buried in Oak View Cemetery at the eastern edge in Antioch, California, is credited when she was a teen with saving a 4-year-old Abe Lincoln from the storm-swollen Knob Creek near the Lincoln family cabin. (You can also see a photo of Mary in the online Lincoln Financial Foundation Collection's Knob Creek Drowning Incident file.

Mary Berry (her maiden name) was 87 years old when she died in 1888 in her Antioch home, but not before she told her heroic presidential story to her posterity. She was born in Hodgenville, Kentucky, in 1801. Lincoln was born on Feb. 12, 1809, in a log cabin 3 miles south of Hodgenville, on the south fork of Nolin Creek in Hardin (now Larue) County. Two years after Abe was born, his family moved to farm some land along Knob Creek about 6 miles northeast of Hodgenville. The Lincoln family lived there for five or so more years, when they crossed the Ohio River into Indiana.

The Knave reported that the Berry and Lincoln families were apparently neighbors in Kentucky for at least 17 years total. Because Mary was older, she was asked to walk the young Lincoln kids (including Abe's sister Sarah) to school. Four-year-old Abe apparently slipped from a log on his way to his first day of school, when teen Mary saved him.

The Martinez Historical Society in California begs to differ, stating that the person who saved Lincoln from drowning as a boy was a woman by the name of Eliza Nottingham. About Eliza, they wrote: "We are not sure how she came to be in this area. When she was on a family outing at the age of 9, she saved a 4-year-old boy from drowning in a creek. The boy's name was Abraham Lincoln."

In the East Bay Times, on Oct. 9, 2012, two cemetery tour history buffs, who pulled their narrative from old newspapers viewed on microfilm and other documents found in the archives, explained how Eliza was a 9-year-old girl when she was "credited with saving a then-4-year-old Abraham Lincoln from drowning in a creek."

Believe it or not, Rev. Dr. Winkley's same Knave column, which told how Mary Head Berry Mitchell saved a young Abe Lincoln, also explained that the heroic tale somehow strangely "attached itself" also to Eliza Nottingham, who was a descendant in the same Kentucky family tree! If that weren't strange enough, Eliza went to her grave on Sept. 12, 1880, and is buried in a cemetery roughly 20 miles away from Mary Head Berry! Living and dying in such close proximity, after coming west from Kentucky, it makes me wonder whether or not the ladies compared stories back then. 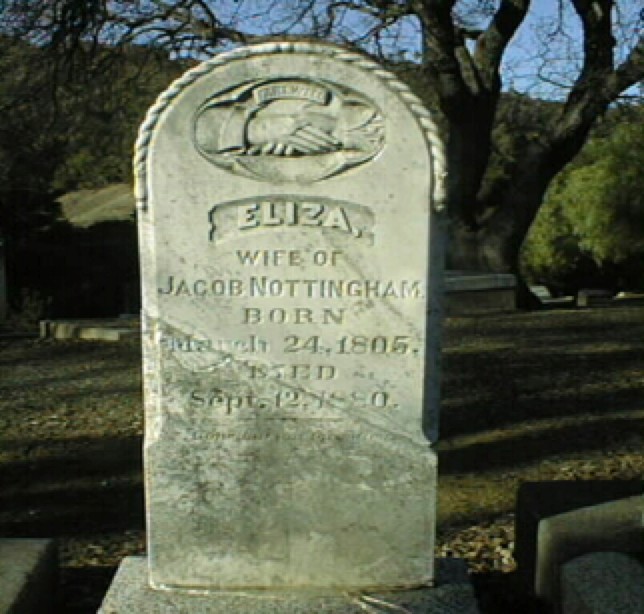 To finish this column with a great Emancipation Proclamation anniversary full-circle, what I love about the Martinez Historical Society's belief that Eliza Nottingham was Lincoln's stream savior is that she is buried across from someone who is also very special. The Society wrote: "Ironically, she is buried opposite Hardy the Faithful, a former slave."

How fascinating is it that Eliza could have saved the life of the future president who would one day sign the Emancipation Proclamation and save the black man ("Hardy the Faithful") who would one day be buried next to her 2,000 miles away where they laid their claim to freedom on the Western frontier?

One day I would love to hear Lincoln scholars debate the truth about Honest Abe's real stream savior. As I said in the beginning, you can't make this stuff up.