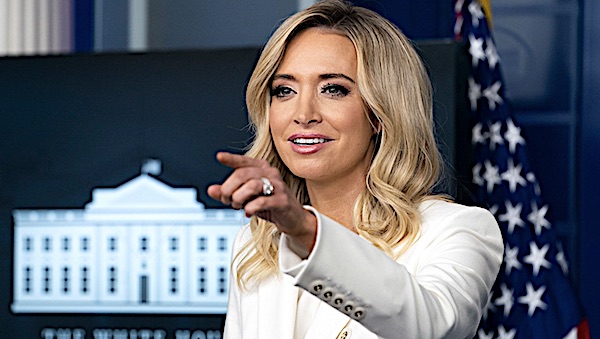 Reporters at the White House on Wednesday were scolded by Press Secretary Kayleigh McEnany for refusing to ask any questions about the historic Middle East peace agreements signed Tuesday.

It had been decades since the last such agreement between an Arab nation in the Middle East and Israel had been accomplished.

"What I will weigh into is the Middle East peace deals signed yesterday that I did not receive a single question about. That was the first time that happened in a quarter of a century. If Obama or Biden would have achieved this it would have looked a lot different," she said.

"You wouldn't have Chuck Todd saying he's uncomfortable with the deal that brings peace between the United Arab Emirates and Israel and Bahrain," she continued. "You wouldn’t have CBS calling it quote 'a business deal.' And you wouldn’t have Nancy Pelosi calling it a distraction. Maybe it's a distraction from her visits to the hair salon. But those were significant agreements. It’s the first time in a quarter of a century three peace deals in 29 days. It took 26 years for the prior two peace deals. So the Nobel Peace Prize nomination for the president is very well deserved."

Kayleigh McEnany: "If Obama and Biden had achieved this... you wouldn't have Nancy Pelosi calling it a distraction. Maybe it's a distraction from her visits to the hair salon." pic.twitter.com/b5BeTpBMTa

The Gateway Pundit pointed out one reporter, Brian Karem, asked, "Kayleigh, if he's a law and order president, why does he keep breaking the law?"

The agreements with the UAE and Bahrain followed the signing of historic peace agreements between Kosova and Serbia.