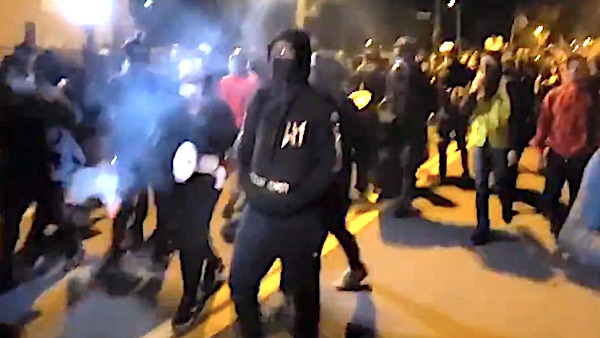 Protesters in Rochester, New York chanted on Saturday “give us our sh*t” as unrest and calls for reparations in the city grow.

“If they don’t give us our sh*t, we’ll shut sh*t down!” a group of protesters chanted, video uploaded by Twitter user ScooterCasterNY showed. One protester carried a burning object.

“If they don’t give us our sh*t, we’ll shut it down.” Black Lives Matter protesters in Rochester demand reparations, or else. pic.twitter.com/FEiXubjfnK

On Sunday, lawyer and activist Danielle Ponder spoke to protesters in front of the Rochester Public Safety Building, saying that reparations could decrease property crimes, the Rochester Democrat and Chronicle reported.

“What if we had the drug rehabilitation centers that rich people have? … What if gave reparations to the black community?” Ponder said.

“Why do we have property crimes? Because people are living in poverty,” local activist and lawyer Danielle Ponder said, according to the local outlet. “Because people are dealing with drug addictions. What if we had the drug rehabilitation centers that rich people have? … What if we gave reparations to the Black community? What if we ensure everyone is making a living wage so they can take care of their children?”

Civil unrest in Rochester, New York has increased after a video recently surfaced showing the March death of Daniel Prude, a black man who died in police custody, according to the Democrat and Chronicle. Prude’s autopsy ruled his death to be a homicide by asphyxiation.

Some of the demonstrations in the city have turned violent, video showed. Rioters intimidated outdoor restaurant patrons on Saturday, breaking tables and forcing diners to flee the area.

Demonstrators can be seen drinking diners’ beverages and breaking glass, according to video.

#HappeningNow the protesters in Rochester NY are “shutting down restaurants”, tables are broken, people running off scared #rochesterprotests pic.twitter.com/oxmlZp526w