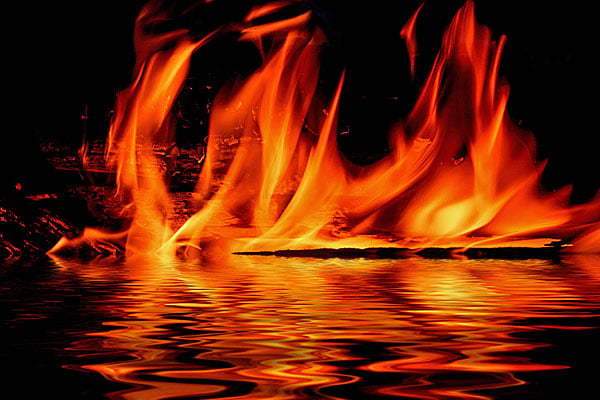 I live near two of the Oregon towns that basically burned to the ground last week – Phoenix, population 4,600, virtually obliterated with approximately 1,000 homes destroyed, and neighboring Talent, population 6,500, which lost hundreds of homes. Virtually everybody in Oregon is currently breathing dangerously toxic smoke-polluted air, reportedly the worst air on earth.

Meanwhile, Democrats, in keeping with the rule that everything happening during an election year must be politicized, are blaming the ferocious fires ravaging my state, as well as California and Washington, on climate change – and therefore on President Trump and “climate-change denying” Republicans.

Oregon Sen. Jeff Merkley, a Democrat, said over the weekend that President Trump blaming the abandonment of sensible “forest management” for wildfires is “just a big and devastating lie.” Demanding that Americans vote for a president who would “follow the science on global warming,” Merkeley told ABC’s “This Week”: “The Cascade snow packs have gotten smaller. Our forests have gotten drier. Our ocean has gotten warmer and more acidic. And this has been happening steadily over the last several decades. America not only has to get its own act in order, it has to help lead the world to take this on. This is a planetary-scale tragedy of the commons that we need leadership to end.”

Likewise, Jay Inslee, Washington’s Democrat governor – best known recently for allowing the anarchist “CHAZ/CHOP” autonomous zone to take over six blocks of downtown Seattle – told “This Week” that America’s western states “have a blowtorch” over them “which is climate change,” the Hill reported.

“We know that climate change is making fires start easier, spread faster and intensify,” said Inslee. “And it is maddening right now that, when we have this cosmic challenge to our communities, with the entire West Coast of the United States on fire, to have a president to deny that these are not just wildfires, these are climate fires.” Inslee insisted Americans must “vote on climate” in November, adding, “if this is not a signal to the United States, I don't know what it will take.”

Should President Trump reverse the leftist policies that have scorched the American West?
93% (86 Votes)
7% (6 Votes)

Almost as an afterthought, the Post writers add: “Another factor – decades of fire suppression policies, including a lack of prescribed burning – aggravated conditions further by leaving more material for the fires to burn.”

Oh. So, allowing fuel to accumulate endlessly, without any thinning, logging, mitigation, controlled burns or firebreaks – which reliably results in the creation of a perfect environment for apocalyptic fires just requiring a spark, which lightning, human carelessness or even arson can and do provide every “fire season” – is just “another factor” that, you know, “aggravated conditions.”

Three decades ago, President Bill Clinton helped create the conditions necessary for today’s massive western wildfires by limiting the U.S. Forest Service’s ability to thin out dense thickets of foliage and downed trees on federal land and also from deploying controlled burns meant to safely cull underbrush in forests to reduce the chance of massive fires.

Clinton also introduced the Roadless Rule restricting the use of existing roads and construction of new roads on 49 million acres of National Forest, effectively keeping forestry officials out of the forests to identify problems that could lead to massive conflagrations, like those consuming millions of acres right now. Republican presidents since then have failed to reverse these reckless, heedless policies.

Before Clinton’s actions, there was the "spotted owl" crisis here in Oregon. Environmentalists claimed the northern spotted owl was dying out because of commercial logging of old-growth forests where the birds nested. So, in 1991 a compliant judge halted logging in Oregon's national forests, causing the loss of about 30,000 jobs, an 80% reduction in timber harvesting, a consequent decrease in the supply of lumber and sky-high prices. I remember – I was there.

However, it wasn't owls that environmentalists were in love with; they were in love with stopping loggers from harvesting any trees in Oregon's old-growth forests. The owls just provided the needed "crisis" to help advance their radical agenda.

Oh, here's the rest of the story: Long after Oregon's timber-based economy was decimated by the court-ordered logging ban, which also made responsibly managing the forests far more difficult, the northern spotted owl population inexplicably continued to decline. Surprise! New research showed logging in old-growth forests wasn't the problem at all. The real problem, it turned out, was competition from another larger and more aggressive species of owl that liked the same habitat and food as the spotted owl. But whatever. Leftists and radical environmentalists just shook the dust off their feet and moved on heedlessly to their next Utopian adventure.

Here is my plea to President Trump:

Mr. President, more than half of Oregon’s land is controlled by the federal government, either the Bureau of Land Management or the U.S. Forest Service. If President Clinton could wreck our state by ignorantly sucking up to radical environmentalists, then hopefully you can undo this damage by aggressively restoring proper forest management to the vast public lands out here in the West. Please act now, before it's too late. Thank you.

David Kupelian
David Kupelian is an award-winning journalist and bestselling author of "The Marketing of Evil," "How Evil Works" and “The Snapping of the American Mind.” Follow him on Facebook.
WND is facing an existential threat. How you can help
The Democratic Party's secret weapon
Joe Biden is undermining America's Armed Forces
'Two plus two equals five.' Orwell's '1984' is here
We're all 'domestic terrorists' now
See more...