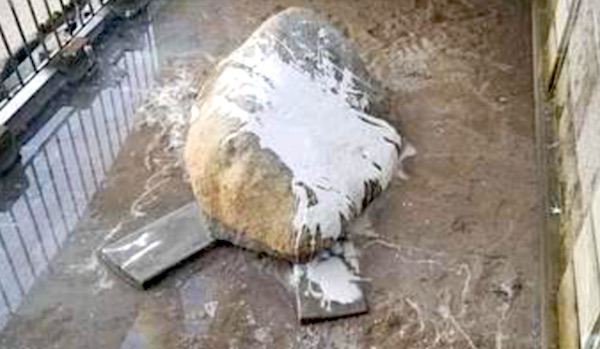 For the second time this year, Plymouth Rock is the victim of vandals.

Approximately a gallon of white paint was poured onto the rock on Friday night. As quickly as it was found, it was gone.

"It's one of our treasures, but to the country, this is basically where, you know, the beginning of the story, part of it anyway, and it's hurtful. And I don't know if it was done as a prank, or it was a hate thing," Dick Quintal, vice chair of the Plymouth Board of Selectmen, told WCVB-TV.

Plymouth Police Chief Michael Boteiri told the station: "We have a couple of detectives working on it right now, looking at some video footage and trying to figure out who was in the area."

"The Town of Plymouth takes great pride in the symbolism of Plymouth Rock," said Lea Filson, executive director of See Plymouth, the official tourism agency of the town and county of Plymouth.

"Through the glacial period, through the thousands of years the Wampanoags had their settlement in Plymouth, then called Patuxet, through the Mayflower Pilgrim landing and through today, it remains a witness to history."

The rock, once three times the size, has through the years been cut up, moved around, and chipped off. Pieces of it can be found across America.

Today, what's left of the rock sits below a canopy in Plymouth, Massachusetts, where it originally settled during the glacial period. Over a million visitors every year come to Plymouth to look at the rock, rumored to be where the Mayflower Pilgrims stepped off their shallop upon landing.

In February, the rock was spray-painted red, police later charged a 17-year-old in that incident.

"Why? It's just disheartening to see," Nick Failla, Plymouth superintendent of parks, told WBZ-TV. "Because after February, when a lot of the monuments got hit, and now it's happening again."

"In February 2020, as on Friday, as in every time it is vandalized, Plymouth town workers quickly cleaned the rock," Filson said.

"Tourists visiting the landmark today will see a clean Plymouth Rock engraved with 1620, the year the Pilgrims arrived."