"Some White colonizers 'adopted' Black children," Kendi wrote on Twitter. "They 'civilized' these 'savage' children in the 'superior' ways of White people, while using them as props in their lifelong pictures of denial, while cutting the biological parents of these children out of the picture of humanity."

Kendi was reacting to a tweet featuring a photo of Barrett's sister, Carrie, holding children who were not adopted by the judge, DailyMail.com reported.

Kendi, the author of three No. 1 New York Times bestsellers, including "How to be an Antiracist," was named this month to the Time 100 list of the most influential people in the world. Al Sharpton has called Kendi "one of the most important scholars of his generation, accurately interpreting the civil rights gains and losses across the many years."

Kendi said on Twitter he was targeting the "belief too many White people have: if they have or adopt a child of color, then they can't be racist."

Twitter user Chris Viegas called for Boston University to fire Kendi for his "racism." Another said Kendi should resign because he is "more racist than David Duke ever thought about being."

Kendi was asked by another Twitter user to "show us where in our society some non-Racism has been achieved so at least we have something to move forward toward."

"Instead you give us racism as the fundamental element of all human interaction in our society while you enjoy success at the pinnacle of the status quo." 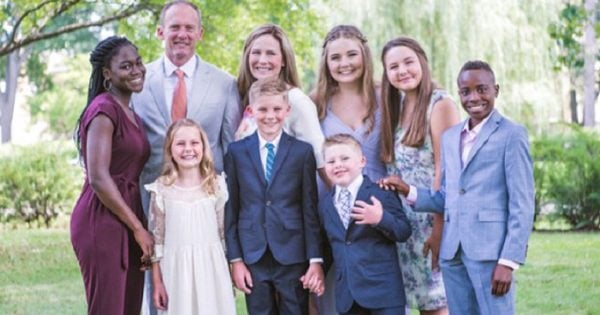 'Scooped up by ultra-religious Americans'

Meanwhile, a Democratic activist, Dana Houle, has called for an investigation into the adoption of the two Haitian children to determine whether it was ethical and legal.

"Would it matter if her kids were scooped up by ultra-religious Americans, or Americans weren't scrupulous intermediaries and the kids were taken when there was a family in Haiti?" she asked on Twitter.

Trump officially announced the nomination of Barrett, a 7th U.S. Circuit Court of Appeals judge, during a Rose Garden ceremony Saturday at the White House.

"This should be a straighforward and prompt confirmation," Trump quipped with a laugh.