The first LGBT culture-war battle of which I became aware as a newly minted Christian regarded the question of whether or not homosexuals should be allowed to teach schoolchildren. That was the question posed in the Briggs Initiative on the California ballot in November 1978. What I remember clearest from that battle was the moral outrage of virtually every pundit: that conservatives would dare argue that homosexual teachers would push their agenda or lifestyle on children in the classroom. The effrontery! The LGBTs' marketing campaign was so successful at vilifying the pro-family side for "unfairness" that even former Gov. Ronald Reagan came out against it, helping to turn early overwhelming public support into a 58-42% defeat.

Of course, after the Briggs Initiative failed, homosexuals flooded into the teaching profession, took over the teachers unions and immediately began indoctrinating children with non-stop LGBT propaganda in a nationwide campaign that was eventually institutionalized as core-curriculum, while disapproval of homosexuality became punishable as "hate speech." That campaign peaked under President Obama's "Safe Schools Czar," Kevin Jennings, founder in 1990 of GLSTN, the Gay Lesbian Straight Teachers Network, which soon exchanged the word "Teachers" to "Education" (as in GLSEN) to obscure the activist role of teachers. GLSEN in turn organized the national network of "Gay/Straight Alliance" student clubs in U.S. public schools, which recruited vulnerable teens into LGBT self-identification and trained them in Marxist tactics to transform youth culture through confrontation and peer-pressure (backed by GLSEN teachers and administrators). If you've ever wondered why such a huge percentage of young people are so radically pro-LGBT today (even many supposed conservatives), now you know.

Importantly, Obama was forced to fire Jennings after his pro-pederast views and connections were made public. Pederasty (a sub-category of pedophilia) is better known as man/boy sex, as in the North American Man/Boy Love Association (NAMBLA), which was represented in early "Gay Pride" parades by Harry Hay (founder of the U.S. "gay rights" movement).

A primary focus of the LGBT movement has always been children – pre-pubescents being primarily targeted for emotional and ideological indoctrination, post-pubescents for both indoctrination and active participation in LGBT culture. This pre/post puberty distinction, however, was not reflected in the (still active) official 1972 Gay Rights Platform (drafted in Chicago by 200 LGBT organizations), which calls for "Repeal of all laws governing the age of sexual consent" (without regard for the age of the child).

In 1999 the late Rev. Jerry Falwell exposed an example of indoctrination of young children in the British-originated "Teletubbies" TV program. One of the four characters, Tinky Winky, was defined by a mocking journalist: "purpleness (the gay pride color), [an inverted] triangle (the shape of the gay pride symbol) and 'magic bag' [a purse] as evidence for Tinky Winky's same-sex preference." The U.S. distributor replied, "To think we would be putting sexual innuendo in a children's show is kind of outlandish." [The effrontery!], but the article did admit "Tinky Winky has been a gay icon in Britain since the show premiered there in 1997." The ridicule of Falwell was so relentless that few would defend him for what we front-line pro-family activists instantly recognized as unmistakable toddler-targeted conditioning, called "grooming" in criminal justice terminology.

I'll be mocked for reviving what the left thought they killed with ridicule, but bring it on! Christians need to see examples of leaders who can survive the smears without backing down or apologizing. I've made a career of doing that.

I'll now double-down by contending that the ubiquitous "rainbow unicorns" and similar rainbow imagery for children is a more recent example of intentional LGBT grooming of very young children. To be sure, the rainbow has long been an element of the entertainment culture of American children, so the scoffers have more ammunition for scorning this analysis. But, given the nearly quarter-century long worldwide effort the LGBTs have made to hijack (God's) rainbow as their exclusive brand, modern designers of children's toys and entertainment cannot claim innocence of their potential effect on children's association of rainbows with goodness, planted in young minds like seeds lying dormant until puberty – when these same pre-conditioned kids will be ripe for recruitment.

When I talk about LGBT recruitment of kids, I'm not primarily talking about adult molestation of prepubescent children, which thankfully remains a rarity, but of inducing young teens to experiment with same-sex relations in puberty with each other or older peers, triggering the psychological power of sexual-orientation "imprinting" rooted in the association of first-time sexual pleasure with conclusions about one's sexual identity. "If I enjoyed it, I must be gay" is a very common element of the testimonies of ex-gays regarding their early sexual experiences – very often with someone 5 to 10 years older. Once they're in the door, they become "fair game" for LGBT adults based upon the kids' own self-identification as "gay." And as anyone who monitors the LGBT culture knows, laws and social traditions about self-restraint and inter-generation sex just don't apply to "gay" kids, as a new California law (SB145, signed by the reprobate Gavin Newsom on Sept. 11) openly admits.

All Christians have a duty to protect all children from sexual grooming by predators. And make no mistake, ANYONE who affirms the grossly anti-Biblical presupposition of "Sexual Orientation Theory" (that LGBTs are "born that way" and cannot reorient to normalcy – a direct contradiction of 1 Corinthians 6:9-11) is complicit in the grooming process. The only antidote to that poison is truth spoken in love by people who put their faith in God and won't shrink back from the bullies (who WILL attack you). If you want a resource to help you with that, I will gladly send you a free copy of my textbook on the LGBT agenda and how to oppose it. Request "Redeeming the Rainbow" by email.

One other thing. We must stop reinforcing the LGBTs' claim on God's rainbow as their brand. We need a new symbol for our side to use as a graphic depiction of their movement. Send me your ideas in graphic form – suitable for all ages – and I'll do a follow-up article featuring the entries.

This letter and drawing was sent to my office in 2001 by a concerned parent whose child brought it home from elementary school: 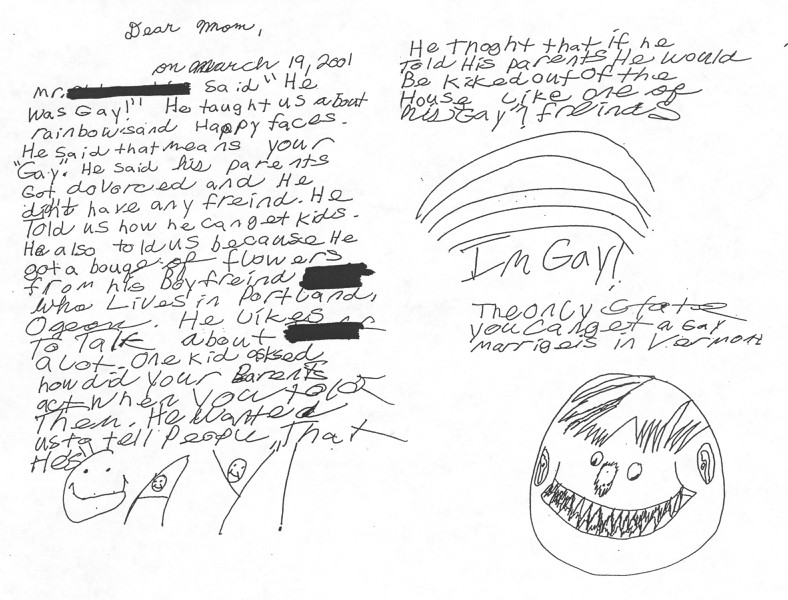