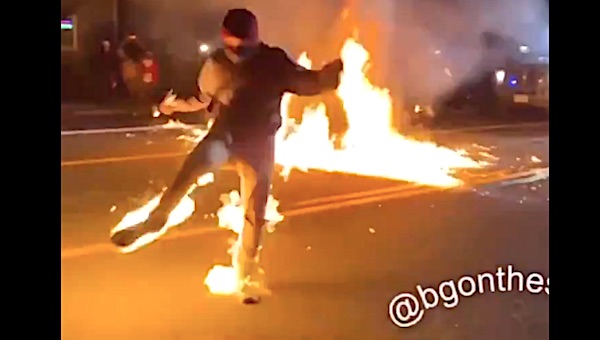 A Portland, Oregon protester accidentally lit himself on fire as demonstrators faced off with police Saturday night, video shows.

The man appeared to run through a fire in the middle of the street lighting his pants on fire in front of police officers, according to video of the incident. Fellow protesters then struggled to put the fire out as the man ran around in apparent panic, the video shows.

At one point in the video, police officers walked over to and attempted to assist the man. The fire was caused by a molotov cocktail, according to Cory Elia, a Portland-based video journalist who filmed the incident from a different angle.

A molotov cocktail was thrown pic.twitter.com/rCqQa6ydgm

“This criminal activity presented an extreme danger to life safety for all community members, and prompted a declaration of a riot,” the statement said. “The crowd was advised over loudspeaker that it was a riot and they were to leave the area to the east immediately.”

Fire bombs were thrown at officers, injuring at least one community member. Police are trying to restore peace and order for the safety of this neighborhood. https://t.co/V3UOCR6Bc4

Saturday marked Portland’s 100th straight day of protests and riots, Oregon Live reported, which have occurred since the death of George Floyd who died in Minneapolis police custody after an officer kneeled on his neck, video shows.