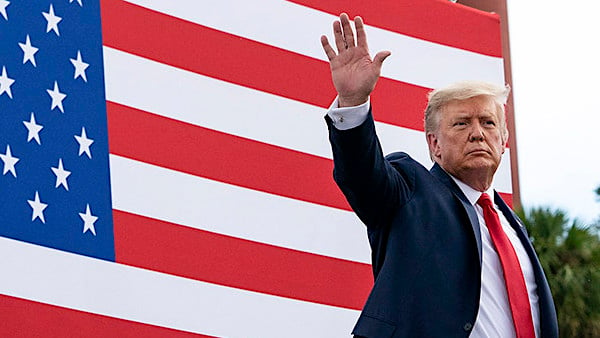 The riots in reponse to the death of George Floyd are pushing voters toward the re-election campaign of President Trump, a new poll shows.

Rasmussen Reports' survey found three of four likely voters who've had violent anti-police protests in their community say the protests are an important factor in their vote. Among them, a sizable majority like the job President Trump is doing.

Significantly, 63% of these voters strongly approve of the job Trump is doing versus 35% who strongly disapprove, the report said.

The survey of 1,000 likely voters was conducted Sept. 9-10. The margin of sampling error is pluse or minuse 3 percentage points with a 95% level of confidence.

Rasmussen noted the protesters are pushing for defunding police departments and using that money for social programs. But 66% of Americans oppose defunding the police in the community where they live. Sixty-one percent believe violent crime is likely to go up in communities that defund the police.

Fifty-five percent of Republicans say the violent protests are very important to their vote, compared to 35% of Democrats and 33% of voters not affiliated with either major party, the report said.

Paul Bedard wrote in his "Washington Secrets" column that the Black Lives Matter protests "that have turned violent have rattled voters in those riot zones and swung them behind President Trump in a big way."

"The survey is the latest showing Trump winning the 'law and order vote' as the country sees violence from the protests expand from big cities to smaller communities, such as Lancaster, Pennsylvania," he wrote.

"Trump’s position is not only winning fans but may also be helping his overall approval rating. Rasmussen, for example, also said that Trump’s approval rating is 51% for a second day. At this stage of his presidency and reelection campaign, former President Barack Obama had a 49% approval rating."