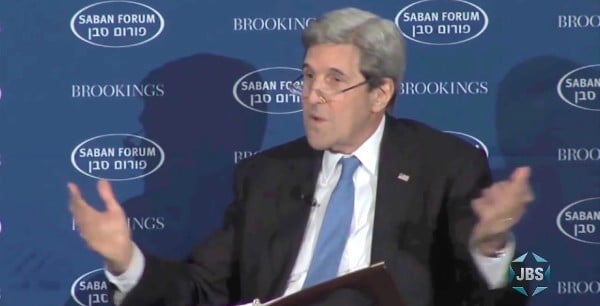 A video clip has resurfaced of former Secretary of State John Kerry adamantly declaring in 2016 there will be no "separate peace" in the Middle East between Israel and the Arab world, without the Palestinians.

That statement hasn't aged well, as many have pointed out on social media, with the signing of the Abraham Accords on Tuesday. The agreements normalized relations between Israel and two Gulf nations, the United Arab Emirates and Bahrain.

President Trump hailed the agreements as the "dawn of a new Middle East."

But at a 2016 forum at the Brookings Institution, Kerry insisted such agreement would ever happen.

"There will be no separate peace between Israel and the Arab world," Kerry said. "I want to make that very clear with all of you.

"I've heard several prominent politicians in Israel sometimes saying, 'Well, the Arab world is in a different place now. We just have to reach out to them. We can work some things with the Arab world and we'll deal with the Palestinians.' No. No, no and no," he said.

"I can tell you that, reaffirmed within the last week because I've talked to the leaders of the Arab community, there will be no advanced and separate peace with the Arab world without the Palestinian process and Palestinian peace," said Kerry.

"Everybody needs to understand that. That is a hard reality."

"John Kerry with a 2016 Middle East take that aged like milk in a sauna," he wrote.

Washington Free Beacon executive editor Brent Scher wrote: "The only thing more amazing than this clip of John Kerry is that the Democrats are currently running on putting all the same people from this clueless administration back into the WH."

John Kerry with a 2016 Middle East take that aged like milk in a sauna. pic.twitter.com/2Vae6yDJFt