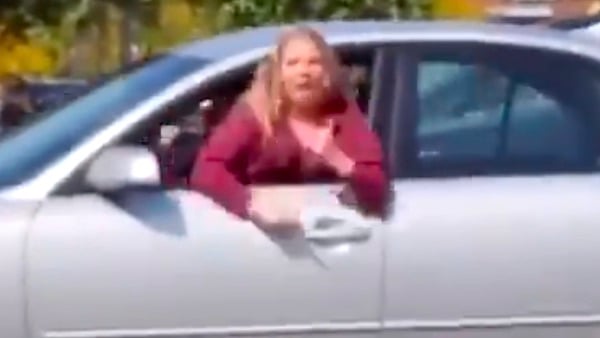 A viral video shows a Trump-hating driver leaning out of her car while it is moving to flip off a group of supporters of the president.

She then crashes into the car in front of her.

How embarrassing. The driver starts screaming at Trump supporters and then crashes into the car in front of her.

Police then approach the vehicle. Lmao.

The Washington Examiner reported the video doesn't show the point of impact, but the driver is seen frantically trying to hit the brakes.

After the impact, sirens can be heard, and two officers show up at her car door.

"How embarrassing," Daily Caller senior congressional correspondent Henry Rodgers tweeted. "The driver starts screaming at Trump supporters and then crashes into the car in front of her. Police then approach the vehicle. Lmao."

Legal Insurrection reported the women driving the car "took her hands off the steering wheel, leaned out the window, and flipped off a bunch of strangers. They were not in her way or bothering her."