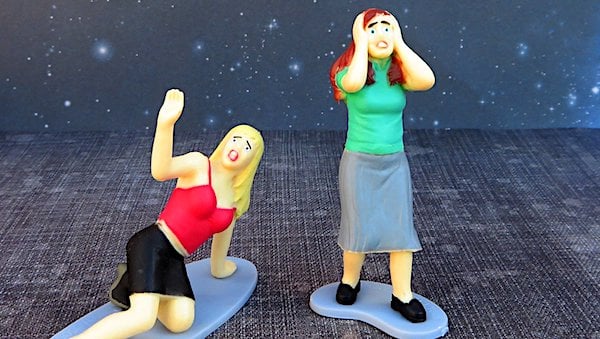 Fearful Americans who self-censor "are doomed to succumb to the will of those who bully the hardest and shout the loudest," warns scholar Judith Bergman, citing a recent survey.

In a column for the Gatestone Institute, where she is a senior fellow, Bergman cited a Cato Institute/YouGov survey in July that found 62% of the Americans said "the political climate these days prevents them from saying things they believe because others might find them offensive."

The U.S. "nominally enshrines the most far-reaching freedom of speech, thanks to the First Amendment of the Constitution," she noted.

"Yet the average number of Americans who self-censor is slowly beginning to approximate that of Germany, where ... nearly two-thirds of citizens "are convinced that 'today one has to be very careful on which topics one expresses oneself,' because there are many unwritten laws about what opinions are acceptable and admissible."

Among "staunch liberals," she explained, nearly 6 in 10 "feel they can say what they believe."

"If truly representative, the numbers are chilling," she wrote.

In Germany, which has aggressive hate speech laws, about two-thirds of the citizens believe "today one has to be very careful on which topics one expresses oneself."

But in the U.S., it's about the same, she noted, even without such laws.

In the survey, 32% of employed Americans say they were worried about missing out on career opportunities or losing their job if their political opinions became known.

The higher the education level, the more fear there was of expressing viewpoints, she said.

"Those with the highest levels of education are most concerned. Almost half (44%) of Americans with post‐graduate degrees say they are worried their careers could be harmed if others discovered their political opinions, compared to 34% of college graduates, 28% of those with some college experience, and 25% of high school graduates," she wrote.

The survey found young people especially are afraid to speak their minds.

"Cancel culture has moved from campus into American society. The topics no longer acceptable as legitimate subjects of unconditionally free and open public debate keep growing: Race, gender, the merits of Western history and civilization, and climate change currently top the list of taboo subjects. In addition, there are uncountable words and concepts that are no longer considered legitimate, even names of food products. Those who publicly offer dissenting views on any of these issues risk immediate 'cancellation,' especially since the killing of George Floyd and the beginning of the Black Lives Matter protests across the U.S, as reported by Gatestone," she wrote.

"When citizens stop voicing their concerns in public about current events, policies and ideas out of fear that they will lose their livelihoods and social standing, it is – or should be – a huge problem in a democracy. The free exchange of opinions and ideas is the bedrock of free and healthy democracies worthy of their name. How much speech can you shut down – and how many people can you 'cancel' – before public discourse is destroyed altogether?"