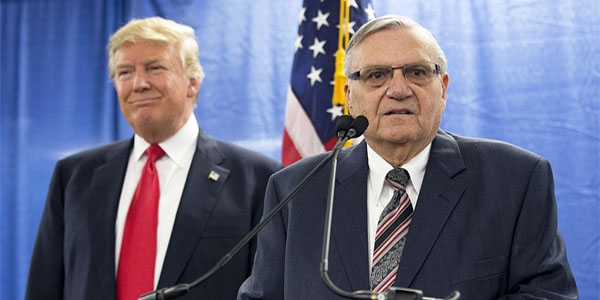 Joe Arpaio, known as "America's toughest sheriff," has teamed up with attorney Larry Klayman to form a new watchdog organization called America's Sheriff to "promote, protect and fight" for the interests and legal rights of the nation's law-enforcement officers.

"In recent months, our brave law enforcement from all quarters have literally been under attack, with radical leftists looting, burning stealing, maiming and even assaulting and killing law enforcement officers, as well as innocent citizens," they said in a news release Wednesday.

"These radicals are comprised of socialists, communists, African-American anti-white separatists, radical Muslims, radicals of the Jewish left, anarchists, atheists, and other leftists of all races, sexes and persuasions. Their obvious goal is to destabilize and take down the creation of our Founding Fathers, and in its place install a Marxist state."

Mayors and governors have been contributing to the problem, they charged.

Their non-partisan group is "founded to defend America's Judeo-Christian heritage as depicted in the Bible, where God looks to the counselors and judges to restore the Tarnished City to the Faithful City."

Arpaio said that after 58 years "in law enforcement serving the nation and around the world, I find it disgusting what is occurring today in our great country where the respect of the criminal justice system and our dedicated law enforcement officers has disappeared because crooked of politicians with a mission to destroy our country for political reasons."

"As the nation is being attacked and law abiding Americans are being robbed, maimed and killed by leftist radicals, our law enforcement officers have been handcuffed by primarily Democrat governors and mayors who ordered them not to defend We the People," he said.

"Larry Klayman and I and all those who join and support America's Sheriff will not stand for this! Without our brave police and other law enforcement the country is left defenseless. Not just our countrymen but the world is watching to see if we will survive as a free people! We must now forcefully act, without delay, to restore law and order to these United States before all is lost!"

Klayman said America's Sheriff is meant to "fill the void left by our virtually inert Justice Department, which by and large has abdicated its responsibility to defend the citizenry in these dangerous times."

"Sheriff Arpaio and I do not just talk, we act on behalf of the American people! Please fellow patriots join us in this just and necessary cause before the United States is taken over by radical socialists, communists and others who seek the destruction of the great creation of our forefathers," he said. "As Thomas Paine declared in the days leading up to our first revolution, 'The summer soldier and the sunshine patriot, in this crisis, shrink from the service of their country; but he that stands by it now, deserves the love and thanks of every man and woman.' These wise and prophetic words ring even more true today."

Arpaio recently lost an election to return to the sheriff's office in Maricopa County, Arizona, where he served for 24 years. He previously fought CNN, Rolling Stone magazine and the Huffington Post for falsely portraying him as a "felon."

The case was dismissed on a technicality by a Washington judge who declared that nothing in the opinion "should be understood to be an endorsement of defendants' errors."

"The court is especially bothered by the conduct of Rolling Stone and the HuffPost defendants, whose errors were not even substantially true. The media is entrusted with the important responsibility of reporting on issues of great public importance so that the American people can make informed decisions at the ballot box and elsewhere," the judge said. "Mistakes, honest ones or otherwise, often cause much harm to public figures like Mr. Arpaio and diminish voters' abilities to impartially weigh the issues that affect them. Later corrections or even apologies of untruths rarely correct the original harm caused."

Arpaio was found liable for a simple misdemeanor by a Clinton-appointed judge who denied the sheriff a jury trial. He later was pardoned by President Trump.

Moore is suing comedian Sasha Baron Cohen for defamation for portraying him as a pedophile on a television program. A judge recently refused Cohen's demand to dismiss the case and ordered full discovery, which will include under-oath depositions of Cohen and other defendants.

Arpaio and Klayman previously collaborated in a successful challenge to an executive order for amnesty for illegal aliens by Barack Obama.

Klayman, a former Department of Justice lawyer, has filed suit on behalf of victims of Hugo Chavez, the Taliban and al-Qaida. He won a multimillion-dollar judgment against Cuba.